The weekdays and Shabbos—two levels of the heart 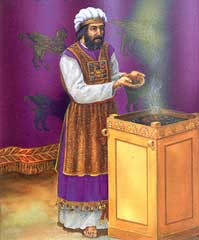 The weekdays and Shabbos—two levels of the heart

The altar represents the Jew’s process of “sacrificing” his or her inner self to Hashem. Thus, the Mishkan contained two altars, the outer and inner altar, representing the two general stages in the Jew’s service of Hashem.

On the outer altar, the Jew would offer up animal sacrifices. This represents the refinement of the Bestial Soul, and in our divine service, this corresponds to the Jew’s divine mission during the weekdays—to refine the body and the Bestial Soul. This gives Hashem pleasure, which is referred to anthropomorphically as “a pleasant fragrance.”[1]

The part of the heart that descends to vest itself in terms that will influence the Bestial Soul is merely the heart’s lower level, known as chitzoniyus ha’lev, the external aspect of the heart. This is the significance of the outer altar.

However, the inner altar was used only for incense offerings, for incense represents a higher form of divine service than animal sacrifices.

The purpose of incense is to produce a pleasant fragrance. We can understand the significance of fragrance from the Talmud: “Which is the thing that the soul enjoys, but the body does not enjoy? Fragrance.”[2] This represents a deeper form of divine service, one that involves the penimiyus ha’lev, the inner dimension of the heart. Of this it is written, “May the entire soul praise Hashem.”[3] This refers to the efforts of the soul itself to rise up to connect to Hashem, without having to lower itself to influence the body, the Bestial Soul, and its worldly environment.

Here the goal is not to refine the body and Bestial Soul, but for the Yechidah, the Neshamah’s essence, to bond and unite with the Essence of Hashem.

Although the animal sacrifices on the outer altar also produced a fragrance that brought pleasure to Hashem, as it were, this fragrance did not compare to that produced by the incense on the inner altar, for just as the entire purpose of the incense is to emit physical fragrance, so does it bring a much more sublime fragrance to Hashem.

This is the difference between the way we serve Hashem in the weekdays, and on Shabbos. On the weekdays (see also here) we refine the Bestial Soul through the chitzoniyus ha’lev, while on Shabbos, we transcend all involvement with the physical (which is the reason for the prohibitions of the thirty-nine categories of work on Shabbos) in order to reach a sublime unity of the penimiyus ha’lev and the Yechidah with Hashem's very Essence (see also here).

This is the deeper significance of the concept that the weekdays act as a preparation for Shabbos, for the more successful one is at refining the Bestial Soul through the chitzoniyus ha’lev during the weekdays, the higher the level of revelation of the penimiyus ha’lev that one merits on Shabbos.

Like what you read? The articles I write take a lot of time and effort. Please contact me to sponsor an article for (at least) $36 in honor of the birthday, wedding anniversary, or yarhtzeit of a loved one, or for a refuah shleimah or the like. Also, see here concerning the tremendous merit of supporting the dissemination of Chassidus, and the blessings that one receives for doing so.
Posted by Yehoishophot Oliver at 4:16 PM