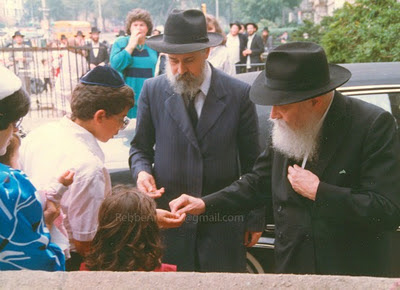 
In the famous public address of 28th of Nissan, 5751, among other things, the Rebbe complained bitterly that the chassidim do not pray for Moshiach to come “mit an emes”—really and truly, but only “mipnei ha’tzivui”—because they were told to do so—i.e., because the Rebbe told them so. They don’t sincerely yearn for Moshiach, for if they would, he would have come long ago, the Rebbe said.

It’s not enough that the Rebbe wants Moshiach. He wants us to want Moshiach. Really and truly. Which requires hard, intensive work. It’s not enough to answer omein, to nod our heads, to repeat slogans, to be “yes-men,” but not to connect to the Rebbe’s words in our minds and hearts. That’s not what a chossid is. We have to mean it, to care, to be bothered, to be distressed. From the depth of our hearts.

And if, G–d forbid, we don’t feel this way, we need to recognize that something is sorely lacking in our bond, in our relationship, in our identity as chassidim. And that itself should bother us.

Then we’ll make it our business to figure out what Hashem is, what Ge’ulah is, what Moshiach is, until we want it because we want it. Because “the Shechinah (divine presence) is in exile.”[1] Because a Jew has a special soul that it is “literally a part of Hashem”[2] in exile. Because the spark of holiness, the divine vitality, in every object that exists is hidden, and thus in exile.

And then we’ll truly feel the Rebbe’s pain at the suffering of the Jewish people in exile. And then we will be what chassidim, what Jews are supposed to be. And then Moshiach will surely come.

Email ThisBlogThis!Share to TwitterShare to FacebookShare to Pinterest
labels: 28 Nissan, inner change, Moshiach, what is a chossid