Jumping into the mikveh 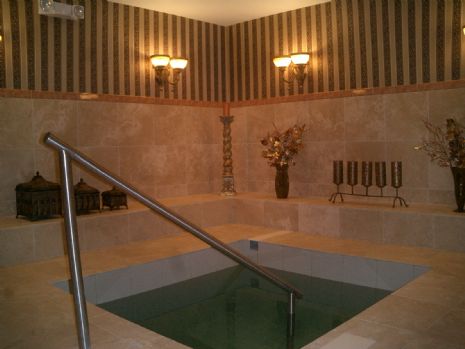 The Baal Shem Tov teaches that since everything that occurs is by Divine Providence, everything one observes holds a lesson in one’s avodas Hashem, one’s divine service. Therefore, an essential part of serving Hashem is making an effort to notice these messages from Above, and then put them into practice in one’s daily life. Since even apparently trivial events in life also occur by Divine Providence, a lesson can and should be derived from them too.
So, here’s a little episode from my life that may hold a lesson. Today the mikveh was very cold. The fact that outside it was 4 degrees below zero didn’t make it any easier. I started inching into the water, but ... couldn’t continue. Then I realized that there was only one way: to run in as fast as possible. So I did, and found to my pleasant surprise that it wasn’t so painful after all.
Sometimes one experiences difficulty in fulfilling a particular instruction or obligation of the Torah, for whatever reason. The solution to this may well be to avoid thinking, calculating, and preparing, for in reality these are forms of subconscious inner stalling that only serve to lead to further inaction. When one feels a lack of interest, a coldness, to a task that must be done today, the only way to overcome this inner resistance, at least in the short term, is—just do it. Break yourself. And after the fact one may well see that it wasn’t so painful after all.
Afterward, hopefully sooner rather than later, one can and should work at refining one’s personal character (especially with the help of a Mashpia, a spiritual guide) to the point that one feels totally comfortable with that particular instruction of Torah. Until then, however, one should not fall short in one’s action, for “the deed is the main thing” (Pirkei Avos 1:17).
This is the concept of kabolas ol malchus Shomayim, acceptance of the yoke of divine sovereignty. This means that Hashem is the King and we are His servants, and so we must obey Him even when we don’t understand, are not in the mood, or are not personally so inclined. Or worse. Because He said so.
The same holds true for the relationship of a Chossid and his Rebbe: The Chossid obeys his Rebbe regardless whether he understands or emotionally connects with the instructions he was given. Because the Chossid has accepted the Rebbe as adoneinu, “our master,” and thus the Chossid is his servant.

Afterward, hopefully sooner rather than later, the Chossid can and should refine himself (especially with the help of a Mashpia) to the point that he understands and feels why these directives are important, and carries them out with eagerness. But in the meantime, he obeys.
Posted by Yehoishophot Oliver at 5:04 PM

Email ThisBlogThis!Share to TwitterShare to FacebookShare to Pinterest
labels: getting started, iskafya, Kabbolas Ol, learning life's lessons, what is a chossid