"It depends on your feeling" 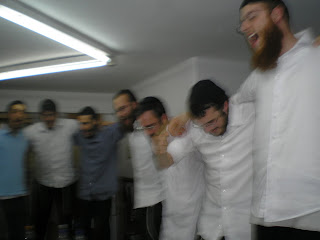 I often hear it asked, “Do we recite tachanun on Hei Teves?” The question is understandable, as one needs to know what to do in practice.

Reb Michoel Seligson related to me (also printed in Otzar Minhagei Chabad, Elul p. 23) that in 5749, he davvened as the chazan on Gimmel Tammuz, and did not recite tachanun. After several people protested, he wrote a letter to the Rebbe asking whether his conduct had been acceptable, and added that he wishes to know the same concerning whether to recitetachanun on Chai Elul. Next to the words “Gimmel Tammuz and Chai Elul,” the Rebbe wrote: “בענינים התלויים ברגש — אין לשאול כיון שזוהי הוכחה שאין רגש”—“In areas that are dependent upon feeling, one does not ask, because asking demonstrates that one does not have the feeling.”

This seems to mean: “True, the Rebbeim never declared it our official custom to recite tachanun on Chai Elul, nor have chassidim kept such a tradition. After all, Chai Elul was a day of celebration carefully hidden until the Previous Rebbe revealed it, and as much as he extolled it, the Previous Rebbe never instructed that one should abstain from reciting tachanun on this day. Likewise, Gimmel Tammuz, the day on which the Previous Rebbe was released from prison (but then exiled), was never formally declared a day of celebration on which chassidim collectively refrained from reciting tachanun.

“However, the halachic exemption from reciting tachanun depends upon your feeling. If you feel truly inspired about the day, and indeed feel it to be a tremendous day of simcha, then you won’t recite tachanun. But if you don’t feel this way, and if you are even unsure about whether you do, then you should recite tachanun as you do normally.”

Perhaps the same principle can also be applied to Hei Teves and other similar days. On the one hand, Hei Teves is a relatively new day on the chassidishe calendar, so there’s a certain resistance to creating “new customs.” After all, “anyone who deviates [from the established custom] has the lower hand” (Bava Metzia 76a). But its recentness is also its greatness. Hei Teves happened with our own Rebbe, the Rebbe of our generation, and this makes it special in a way not found by the Yomei Depagra (chassidishe days of celebration) associated with the earlier Rebbeim.

So, do we recite tachanun on Hei Teves? In this case, the custom is not prescribed. Don’t look inside a book to find the answer, as holy as the book may be—look inside your heart. If you don’t feel filled with joy and elation at his victory and the victory of the Chabad community, then you have no reason not to recite tachanun. (Even for the less emotive types, some simple ways of discerning whether they find the day profoundly meaningful is by seeing whether they enthusiastically fulfill the Rebbe’s directive to purchase seforim on this day, and whether they make a point of attending a farbrengen.) And while you’re reciting tachanun, along with your teshuvah for other things, add to the list the fact that you lack the feeling of joy that a chossid should feel in rejoicing in the Rebbe’s simcha. And hopefully by next year you’ll have grown enough in your avodah that you will indeed rejoice as a chossid should, with a tangible, deeply-felt joy, such that refraining from reciting tachanun will indeed be justified.

1. If you derive your joy on Hei Teves from the very opportunity not to recite tachanun, because you donoot find the avodah of teshuvah burdensome, or simply because you want to skip some of the prayers so you can leave shul sooner, may Hashem save us, then it would seem clear that on a day about which we have received no explicit instruction to recite tachanun, you should davka recite tachanun—for that very feeling.

2. Choosing to recite tachanun is not in itself a proof that one is truly joyful. As in all matters of avodah, one must be thoroughly honest with oneself. As the Mitteleh Rebbe so pointedly said, “If you fool yourself, what have you accomplished by fooling a fool?”

3. Obviously, on days like Yud-Tes Kislev in which the Rebbeim have explicitly declared that we do not recite tachanun, one who considers himself a chossid should not recite tachanun even if he knows that unfortunately he is lacking the proper feeling. (Of course, he should do everything possible to prepare for such days so that he will indeed experience the appropriate feeling when they arrive.)

4. I have heard some say that personal “hergeshim” (conduct based on strong feelings), are all very well, but they should be kept in private. I find it significant that the written response above was addressed to a chazan. When the chazan does not recite tachanun, then the minyan should go along, and the minyan in this case was clearly not necessarily feeling this way. Despite this, the Rebbe implies that if the chazan feels this way, it is legitimate not only for him to abstain from reciting tachanun, but also for the entire minyan to follow his lead. I am not drawing any practical conclusions from this, as that would be the province of a Rov moreh hora’ah, which I do not presume to be; I simply note it as significant.

5. This is just one example of the concept of “tolui behergesh,” but there are numerous other applications. One such instance can be found in connection with singing the Alter Rebbe’s niggun, which chassidim are careful only to sing at certain prescribed times. The Rebbe was asked (Igros Kodesh, Vol. 16, p. 222) whether one may sing this niggun on a certain day of rejoicing—the Rebbe does not specify which—that was not a day in which the niggun was traditionally sung. The Rebbe responded that if the questioner feels that for him, the day in question has the same significance as the days in which this niggun was permitted to be sung, then it would be appropriate for him to sing it. As a precedent for this, the Rebbe mentioned that some chassidim would sing the Alter Rebbe’s niggun on Yud-Beis Tammuz, the day in which they celebrated the release of the Previous Rebbe from exile, because they considered it an extension of the liberation of Yud-Tes Kislev.

Posted by Yehoishophot Oliver at 2:25 AM