Don't Distort the Message of Chanukah 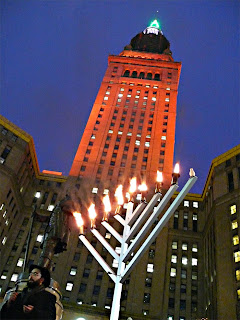 Don't Distort the Message of Chanukah

These gems of wisdom below (and others like it in many locations worldwide) ...


From "Governer Tweets From Lighting":

"The United States allows freedom of relgion and not freedom from religion. Chanukah delivers the message of religous freedom, where the few believers won over the many oppressors."

From "Arizona Gov. Shows Soft Side":

"The menorah serves as a symbol of Arizona's dedication to preserve and encourage the right and liberty of all its citizens to worship God freely."

... impel me to draw my readers' attention to these past posts: The true message of Chanuka and Chanukah: Absolute truth, not pluralism!


I applaud all those who did not succumb to the temptation to follow this trend, choosing instead to speak words of pure, uncompromised faith.


Instead of twisting Chanukah into an American holiday celebrating the secular American values of pluralism and freedom of religion, the speakers at these events should have followed the Rebbe's directive to use this opportunity to promote awareness and observance of the Noahide laws out of a pure belief in the Torah:

There is another matter of primary importance in connection with the public Menorah lighting—influencing non-Jews. Lighting the Menorah “in the entrance of the home, on the outside”[1] affects all those on the outside, including non-Jews. ... Therefore the opportunity of the Menorah lighting, which should be held in the most public, central places, should be utilized in order to inspire non-Jews to observe the Noahide Code. It should be stressed that they should fulfill these laws “because G–d commanded them [these laws] in the Torah.”[2] This abolishes rebellion against G–d, which is the theme of the lights of Chanukah.

Note that the Rebbe says that the message of the lights of Chanukah is the abolition of rebellion against G–d. It is clear that other religions, which reject Torah in one way or another, constitute rebellion against G–d and His Word. Although it is likely counter-productive to attempt to abolish this rebellion through a "frontal attack" of outright condemnation, the desire to avoid doing so does not justify uttering a falsehood. Declaring that Chanukah itself represents some sort of endorsement of the legitimacy of other religions, or using any similar language, G-d forbid, is a hideous distortion of Chanukah into its diametric opposite.
Posted by Yehoishophot Oliver at 12:22 PM