Night and Day—Body and Soul 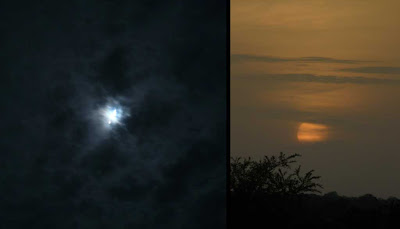 Night and Day—Body and Soul

Rabbi Yehoishophot Oliver
“In the beginning, Hashem created the heavens and the earth. ... And there was evening, and there was morning, one day.”[1]

There are many fundamental differences between the Torah and non-Torah approach to time, and this manifests itself on many levels. One of the most immediate is that although all agree that a period of a day consists of a period of daylight and nighttime, the non-Jewish world defines a period of a day by saying that night follows day, while Torah in general, and halachah in particular, rules that day follows night.[2] On a practical level, this is most apparent on Shabbos (and Yom Tov), which begins at sundown and ends after three stars have emerged the following night.

But it applies to every day as well, and we must keep this in mind so that we can approach life with a mindset drawn from Torah, instead of the secular model with which we are surrounded.

This is also evident in the prayers, which are alluded to in the verse, “Night, morning, and noon, I will tell.”[3] We relate Hashem’s praises starting in the evening, with the Ma’ariv prayer; then we continue in the morning, through Shacharis; and we conclude in the afternoon, through Minchah.

But on a deeper level, the Torah is telling us a lesson about our inner selves, of which the external world is a reflection:
Here, too, we find that “day follows night”—Hashem created the body first: “Then G–d, the L–rd, formed the man of dust of the ground,” and only then did He instill the soul into it: “ ... and He breathed into his nostrils a soul of life.”[4]

The same goes for the way in which a Jew should approach self-refinement—refining the body must precede revealing the Neshamah:

Refining the body: This consists of rejecting coarseness and selfish materialism (“chumriyus”) from one’s life and refining the physicality of one’s body (“gashmiyus”—see here for explanation of the difference between chumriyus and gashmiyus) by humbling and subduing the body. This can be accomplished through Iskafya (see here) and through Teshuvah.

In particular, before prayer, one should contemplate the lowliness of the body for concealing the absolute reality of Hashem, which brings the person to humility and a broken heart.[5] This is also the meaning of “One should not approach [Hashem] to pray unless one has due seriousness.”[6]

Revealing the Neshamah: This is accomplished through prayer itself (see here), which consists of a series of stages in which the Jew reveals his Neshamah ever more in his body, until, with the help of Hashem, the Neshamah permeates the body completely. and then lights up the outside world as well through good deeds, devoted Torah study, and careful Mitzvah observance.

The main purpose of Tefillah is to grasp the greatness of Hashem and then become inspired with love for Hashem, thereby revealing the Neshamah. Here the focus is positive, and so Tefillah should be recited with joy.

However, this joy is only possible because it was preceded by the bitterness at one’s lowliness that preceded prayer, for only after bitterness can one feel true joy.[7] (Note: This analogy parallels the analogy of ploughing being a necessary prerequisite to sowing discussed here.)

This is the meaning of “And there was evening, and there was morning, one day.” By serving Hashem through “evening”—subduing the body, and “morning”—revealing the Neshamah with joy, we reveal the reality of one—the unity of Hashem in the world. Thus, the Jewish people are called “one nation on earth,”[8] for they reveal Hashem’s absolute oneness even in this lowly physical world.[9]

This is also the meaning of the verse, “Days are formed, and if only [we could use to the fullest even] one of them.”[10] Each person is given a limited number of days to live, and the purpose of this time is that we reveal “one in them”—the unity of Hashem in every aspect of life. Moreover, the Hebrew word for one, echad, has the numerical value of thirteen because our task is to reveal Hashem’s oneness in the world through illuminating the ten faculties (which, generally speaking, comprise the intellect and emotions) and thought, speech, and action with this awareness.

___________________________________
Like what you read? The articles I write take a lot of time and effort. Please contact me to sponsor an article for (at least) $36 in honor of the birthday, wedding anniversary, or yarhtzeit of a loved one, or for a refuah shleimah or the like. Also, see here concerning the tremendous merit of supporting the dissemination of Chassidus, and the blessings that one receives for doing so.
Posted by Yehoishophot Oliver at 11:27 PM

Email ThisBlogThis!Share to TwitterShare to FacebookShare to Pinterest
labels: body and soul, joy, self-refinement through prayer, the importance of time, the Previous Rebbe's teachings