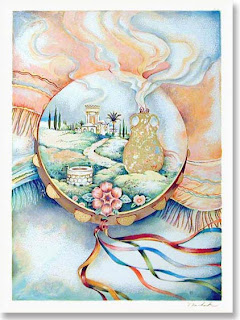 Now, the ultimate reward is the reward of the World to Come, Olam Haba, also known as the Age of the Resurrection; thus, our sages are telling us that we should not even serve Hashem for the sake of reward in Olam Haba.

But why is the desire to receive reward in Olam Haba objectionable? Granted, one can understand how a desire for material reward is lowly, for our world is the lowest world of all, in which G–dliness is completely concealed,[2] and so physical pleasures are the lowest of all pleasures (for more explanation, see here). Thus, Pirkei Avos, the text devoted to encouraging the Jew to aspire to greater piety than the letter of the law technically requires,[3] encourages one to rise to a level at which such incentives are no longer motivating.[4]

In contrast, true pleasure is to be found in sublime spiritual revelation, and that is the soul’s reward after its sojourn in a body, both in Gan Eden, which is a world of disembodied souls, and all the more so in Olam Haba, which consists of living eternal life within a body in a state of pure, essential spiritual pleasure that one derives from being bound up with the infinite light of Hashem, the Source of all life. This pleasure infinitely exceeds any material pleasure. Hashem designated this reward to the Jewish people for their performance of Mitzvos in this world. Moreover, every Jew will surely receive this reward, for “All Yisrael have a portion in Olam Haba”[5]—only rare, extremely wicked Jews are punished so severely that they completely forfeit this portion, as our sages continue, “...and these ones do not have a portion in Olam Haba.”

So if I will anyway receive this reward, why shouldn’t I have in mind that I’m serving Hashem in order to receive it?

The answer is that one should know that Olam Haba, as exceedingly awesome as it is, should not be the entire motivation for the Jew’s performance of Mitzvos.

To explain (see my earlier post on this topic here), every Mitzvah consists of two components:

1. Its status as a divine commandment; this is the same for all the Mitzvos, and comprises the Mitzvah’s very core and essence (“etzem”).

2. The kavanah (lit., intent)—the unique G–dly energy that one elicits in the world, and upon oneself, by performing each of the Mitzvos.[6] This is the (comparatively) superficial aspect of the Mitzvah (known as “giluyim,” manifestations”).

When the Mishnah disapproves of “serving Hashem in order to receive a reward,” it is addressing one who is drawn to keep the Mitzvos because of reason 1. above. He is spiritually sensitive enough to (quite correctly) find that the intense spiritual experience of performing Mitzvos, and the level of G–dliness with which he thereby binds himself, brings him to a state of bliss and ecstasy that is completely unparalleled. And so he rises from level to level, experiencing ever-higher levels of G–dliness in this world, until his soul leaves the body, and he experiences the incomparably greater divine revelation and pleasure of Gan Eden, until he rises still higher and reaches the ultimate ecstasy and purpose of all existence—Olam Haba.[7]

Sounds holy, huh. But for all this person’s spiritual strivings and accomplishments, his piety and profound grasp of Hashem’s greatness, his deeply-felt love and fear of Hashem, and more, he has completely missed the point. In a way, all his spirituality is self-serving, because it is not meant for Hashem alone, but selfishly, to inspire himself so that he can attain tremendous spiritual heights.

In contrast, a true servant of Hashem performs the Mitzvos because Hashem commanded so. Yes, he is aware of the kavanah and reason for the Mitzvah, and he is inspired by it, but that is not what fundamentally drives him to keep the Mitzvos. Practically speaking, this means that he will adhere to the Mitzvah carefully regardless of whether he has personally studied, digested, and become inspired by the kavanah of any particular Mitzvah. The kavanah, the understanding, the pleasure, and the spiritual high—these do not drive him, and so the lack thereof does not weaken him.

Rather, he performs the Mitzvos with bittul, self-effacement, simply because Hashem so commanded him. This is the meaning of the verse, “These are the Mitzvos ... that a man will do, and live in them.”[8] This Jew’s “life” and inspiration is in performing the Mitzvah itself, and thereby connecting to Hashem’s very Essence. And when he desires that G–dliness be revealed in this world, he does not wish it so for his own benefit, but for Hashem’s sake, to bring nachas to his Creator by fulfilling His desire to have a dwelling place in our physical world.[9]

[1] Avos 1:3.
[2] Tanya ch. 36.
[3] Bava Kama 30a.
[4] Of course, a beginner, who hasn’t yet reached a true appreciation of the spiritual, must use the Torah’s promises of material reward and punishment to spur him to avoid sin and pursue good deeds. The Mishnah is encouraging the Jew to graduate from this stage and rise to a level at which he has no need for such motivations. Cf. Sefer HaMa’amarim 5659, s.v. Shuva Yisrael.
[5] Sanhedrin 90a.
[6] Cf. Tanya chs. 4, 46.
[7] Cf. ibid., ch. 36: “It is known that the days of Moshiach, and especially the Age of the Resurrection, is the ultimate purpose of the creation of this world; it was for this that it was originally created.”
[8] Vayikra 18:5.
[9] Midrash Tanchuma, Naso 16. Tanya ibid.


Like what you read? The articles I write take a lot of time and effort. Please contact me to sponsor an article for (at least) $36 in honor of the birthday, wedding anniversary, or yarhtzeit of a loved one, or for a refuah shleimah or the like. Also, see here concerning the tremendous merit of supporting the dissemination of Chassidus, and the blessings that one receives for doing so..
Posted by Yehoishophot Oliver at 9:50 PM

Email ThisBlogThis!Share to TwitterShare to FacebookShare to Pinterest
labels: bittul, pleasure, reward and punishment, the Age of Resurrection, the Rebbe Rashab's teachings