17 Tammuz: Rectifying Undesirable Contact with Non-Jews and their Culture 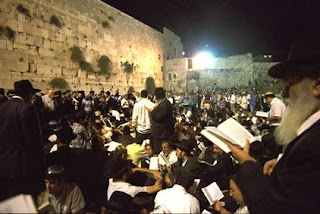 17 Tammuz: Rectifying Undesirable
Contact with Non-Jews and their Culture

The Rebbe explains the significance of the Seventeenth of Tammuz, and the lesson to be derived from it.


On 17 Tammuz, the walls of the city of Jerusalem were breached.


The purpose of a wall is not to isolate oneself from the outside world, for a proper wall has gates in order to enter and leave. Rather, a wall exists to protect against the penetration of undesirable influences.

[In the case of the walls of Jerusalem,] however, [by departing from the city through the gates in the wall,] the wall had a constructive impact upon all matters outside the wall, and upon the entire outside world.

Thus, as long as the wall of Jerusalem was intact, this represented the completeness of the state of the Jewish people. They were both protected from undesirable outside influences, and able to rectify and perfect the outside world by exiting from the wall’s gates.

Thus, the breaching of the walls symbolizes a lack of protection from undesirable influences. Thus, when the walls were breached, the non-Jews invaded Jerusalem. An undesirable relationship between Jews and non-Jews was then formed.

We rectify this by establishing a desirable relationship between Jews and non-Jews—by Jews influencing non-Jews to abide by the Noahide Code. Thus, 17 Tammuz is an auspicious time to intensify our efforts in influencing non-Jews, and so it is also an appropriate occasion to mention yet again the need to influence non-Jews to adhere to the Noahide Code.

In my own words: The seventeenth of Tammuz represents the sin of having some degree of inappropriate contact with non-Jews and their culture, and unfortunately, in our generation we still suffer from this malaise. We have sinned by imbibing secular influences that should have been utterly foreign to us (see here), and thereby compromising our unique role (see here).

We rectify this not only by consistently refraining from such activity in the future (of course), but by doing the opposite—actively influencing non-Jews to come ever closer to Hashem and His Torah, by teaching the universal laws and principles found in the Noahide laws to all the gentile nations. And in this way we also fulfil our divinely-appointed mission, as Rambam rules.[1]

Dedicated by Avi Turner and family, in honor of the birthday of Nechama Bas Luba on 8 Tammuz, and also as a merit for a refuah shleimah for her.


Like what you read? The articles I write take a lot of time and effort. Please contact me to sponsor an article for (at least) $36 in honor of the birthday, wedding anniversary, or yarhtzeit of a loved one, or for a refuah shleimah or the like. Also, see here concerning the tremendous merit of supporting the dissemination of Chassidus, and the blessings that one receives for doing so.
Posted by Yehoishophot Oliver at 8:03 PM