The sins of befriending non-Jews and learning their culture 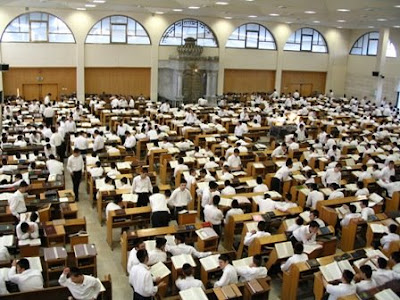 Torah study—“Our life and the length of our days;
we will meditate (on its words) day and night" (Evening liturgy)”

Just a minute, an outsider might ask. It’s a sin to befriend a non-Jew?! Isn’t Judaism a religion of peace and love? If anything, that should be considered a Mitzvah, no?

Well, no. Jews should not be “buddy-buddy” with non-Jews. It’s not that we dislike them. We just know that we ought to ... keep a distance from them. Ours is “a nation that dwells alone.”[2] We have our role in the cosmos, and they have theirs. When we draw too close, those lines become blurred.

A friendship is a two-way relationship. You influence him, but he also influences you. A non-Jewish friend will naturally share his values and feelings with you, and precisely because he is your friend, his company will influence you with his non-Jewish attitudes and culture. We don’t want this because it may weaken the Jew’s devotion to Torah, and even bring him to abandon it altogether, G–d forbid. Thus, we find a concern in Halacha that a close friendship between a Jew and a non-Jew may lead the two to make a deal to marry off their children to each other (known as “chasnus”), which the Torah considers a normal outcome of a very close friendship. (Along similar lines, a religious Jew should even take care not to overly befriend a not-yet-observant Jew—see here.)

In general, although he may do business with non-Jews, a regular ehrleche (fine) Jew is not tempted to befriend non-Jews, and the reason is not just that that he can’t discuss Tosafos with them. He simply can’t relate to them, because he doesn’t live in their world. The cross-cultural divide is too great, and that is a good thing.
However, this is not to say that a Jew should act in an unfriendly or rude manner toward non-Jews, G–d forbid. On the contrary, since non-Jews are created in the image of Hashem, they deserve to be accorded the utmost respect, and even cherished.[3] This is also not to say that one should not have any form of contact with non-Jews; rather (in addition to maintaining contact for the purpose of shared business interests, or the like), one should do so where necessary, but with a clear awareness of the purpose of the interaction in mind. The nature of the relationship between Jew and non-Jew is one of teacher and student, with the Jew inspiring the non-Jew indirectly through his fine moral conduct and wholesome family life, or directly, by teaching him the Noahide laws.
However, the second item mentioned in HaYom Yom, learning secular culture, is a temptation that is lamentably all too common in our times.

Many frum people feel that they must read the newspaper every day, follow the sport, politics, and even gossip, and generally be “up with the latest” amongst the non-Jews. Many immerse themselves in study of secular topics purely for the sake of knowing them, and send their children to schools with a very good record in secular studies even if the Torah studies there are poor; they then insist that their children go to college, and not just in order to earn a good living (despite the severe dangers that their children are exposed to there), but in order to “be a man amongst men” by being au fait with the culture of the western world, finding their prestige from secular academic recognition and titles, and the like. Many indulge in “entertainment” by exposing themselves to supposedly “neutral” novels, television shows, and movies, despite the fact that doing so involves violating the prohibitions of exposing oneself to heresy or immorality). And so on.
The numbers of such people are not small, and probably greater than we estimate. And although not all of the behaviors listed above are necessarily strictly forbidden (except when they involve consciously exposing oneself to heresy or immorality, as above), they are sins in the sense that these are not befitting behaviors for Jews.
“But,” the advocates of “normalcy” clamor, “what’s so terrible with it? Why are you being so fanatic? It’s harmless!”
But it’s not. These influences are saturated with subtle and not-so-subtle inappropriate messages that desensitize us to holiness, true refinement, and actualizing our spiritual potential. They may lead one to start adopting certain typically non-Jewish behaviors, which is in itself forbidden. Ultimately, when imbibed frequently and for a lengthy duration, such influences may entice the Jew to give up Yiddishkeit altogether, may G–d save us.
And above all, preoccupation with the non-Jewish culture, even the most supposedly harmless cartoon, distracts the Jew from what he should be really focused on if he has any free time—Torah study. The Torah is Hashem’s timeless wisdom. It is a priceless gift from Above. A Jew has the constant obligation and privilege to study it, and neglecting it is considered a severe sin.
As the Mishnah exhorts us: “Ben Bag-Bag used to say of the Torah: Turn it and turn it again, for everything is in it. Pore over it, and wax gray and old over it. Stir not from it, for you can have no better rule than it.[4] Everything a Jew could want to know is in the Torah, and it is what should preoccupy him whenever he has a “spare” moment.
_____________________
[1] HaYom Yom, 29 Kislev.
[2] Bamidbar 23:9.
[3] Avos 3:14.
[4] See Mishneh Torah, Laws of Idolatry, 11:1—

One may not follow the rites of idolaters, nor imitate them in dress, hairstyle, and the like. As the verses say: “And you shall not follow the rites of the nation that I evict from before you”;[a] likewise, “And do not follow their rites”;[b] “Beware lest you be lured by [their ways].”[c] The import of all these verses is the same: We are warned not to imitate [non-Jews]. Rather, a Jew must be separate from them and distinguished in his dress and in his other affairs, just as he is different in his doctrines and beliefs. As the verse says, “I have separated you from the nations.”[d]

Like what you read? The articles I write take a lot of time and effort. Please contact me to sponsor an article for (at least) $36 in honor of the birthday, wedding anniversary, or yarhtzeit of a loved one, or for a refuah shleimah or the like. Also, see here concerning the tremendous merit of supporting the dissemination of Chassidus, and the blessings that one receives for doing so.
Posted by Yehoishophot Oliver at 12:20 AM

“The time for your redemption
has arrived!
”