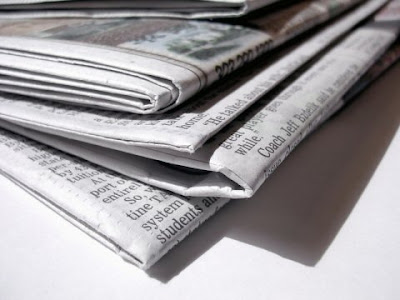 Below is a quote from a Yechidus (private audience) of Reb Nissan Neminov with the Rebbe (it should be noted that the Rebbe requested that this Yechidus be publicized) from which we can learn certain hanachos ha’olam (“worldly attitudes”—see here) to be avoided:

... Each person only has a limited amount of time and strength, and [expending effort for unnecessary pursuits] will detract from one’s time for studying Nigleh and Chassidus.

[To explain this, the Rebbe used the following example:] In America one is supposed to read the newspaper, and people imagine that they cannot do otherwise, and cannot be an exception. However, even if only five minutes are spent, time has been lost—never mind if more time was spent. And who will take responsibility that more time will not pass?

This is all only an example of the American lifestyle, from which one can infer with respect to other aspects ...

Below are two quotes from sichos:

Recently it has become a “custom” for married people that they must read the newspaper in order to know what is going on in the world. And one who didn’t manage to read the newspaper himself will ask his friend to tell him the news that he read in the newspaper. And since “By the mouth of two witnesses every cause will be established” (Devarim 19:15), he does not suffice with hearing the news from one person. He asks another person to tell him the news, for the first person may have missed some details.

If only this “custom” would not become standard for those who maintain fixed times for Torah study, and especially for those for whom these fixed time are established in their souls. This is all the more objectionable for Yeshivah students.

To sum up in my own words, there seem to be four reasons that the Rebbe opposes reading newspapers and the like:


1. Even apparently benign activities that are expected by modern society, among them the practice of daily reading the newspaper, are in fact spiritually detrimental, for they conflict with the values, expectations, and priorities that a Torah-observant Jew should have.

2. Paradoxically, preoccupation with learning the details of the problems of society in fact distracts the person from doing his or her part to improve and ultimately even remedy those very problems.

3. Since our time in this world is limited, such activities necessarily distract the Jew from the way that his time should be spent, and moreover, they have a certain addictive quality, by which one’s energies are spent in the wrong place. In particular, the constant effort to be informed of the news necessarily distracts one from his obligation to constantly “stay informed” of Torah, and to devote oneself to doing good deeds.

Another reason: The Rebbe seems to be melamed zechus—“assuming the best,” that those reading the newspaper are not reading any forbidden content (i.e., heresy and sexual immorality). However, it ought to be mentioned that newspapers often contain such messages, whether in the article itself, or in the advertisements, and even if not on an outrageously blatant level, on a level that is still forbidden to view. So those who read newspapers expose themselves to the danger that they may unwittingly or even intentionally read such content, G-d forbid. This is a further reason to avoid such a practice.


(See here for my follow-up to this article.)
Posted by Yehoishophot Oliver at 5:03 PM

Email ThisBlogThis!Share to TwitterShare to FacebookShare to Pinterest
labels: changing the world, news, the importance of time, the Rebbe's teachings, worldly attitudes