Bridging the chasm between us 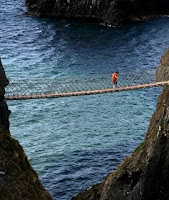 Many of us are so “stuck” in ourselves—in our routines, our personal lives, our family, and our immediate daily concerns—that, as legitimate and even necessary as it may be for us to pursue these things, they naturally become a rut from which we can barely see out of. We have boxed ourselves into ourselves, and we have great difficulty simply relating to others who are not part of our little world.
The Alter Rebbe addresses this concern in the book of Tanya, chapter 32, the chapter famously devoted to explaining the Mitzvah of ahavas Yisrael, loving one’s fellow Jew. There it states that at the core all Jews are one, and yet “the bodies are separate”: The body and the concomitant drive to satisfy one’s selfish material needs (never mind controlling or channeling the urge to indulge one’s more sensual desires) create a tremendous division between us.

The Mitzvah of ahavas Yisrael obligates us to engage in the lifelong struggle to overcome this distance. This begins with striving for inner self-improvement, by curbing one’s material passions and thereby transcending one’s bodily limitations. In this way one makes the Neshama and its interests and aspirations dominant in one’s life, which sensitizes one to the souls of fellow Jews regardless of the bodily separation.

But how can one tell whether efforts at sensitizing oneself have borne fruit, and have produced a feeling of true love for one’s fellow Jew? Practically speaking, one way of measuring how far one has progressed is to consider whether one eagerly fulfils the Mitzvah to rejoice in the celebrations of fellow Jews, and whether one is genuinely pained when other Jews are in distress or grieving. As Rabeinu Yona writes:

If your fellow is in distress, feel pained for them ... and rejoice in their prosperity. If you hear about the distress of Jews who live far away, groan and pray for them, and all the more so for those who are close.

Thus, not only should we share in the joys and sorrows of a member of our own community, but those of every single Jew in the world that comes to our knowledge.

Nowhere are the material pains of our fellow Jews as obvious as they are today in Eretz Yisroel, where Jews suffer from rockets, suicide bombings, kidnappings, sniper fire, and the trauma of constant fear of such attacks.

Then there is the perhaps even more painful phenomenon of Jew against Jew:
When we hear that our fellow Jews are abused, discriminated against, victimized, demonized, expelled, dispossessed, betrayed, traumatized, injured, or slain, by strangers and even by brothers, it ought to make a difference to us. Not only should we not come up with transparent, pathetic excuses to look the other way (such as “we don’t get involved in politics” or “people will be turned off if we speak about such topics”), but it ought to matter to us, bother us, shake us up, outrage us.
As the Rebbe said many times concerning such events, “When it hurts, you scream!” If we’re not screaming, then it means we’re not hurting. If we’re not hurting, then our love for our fellow Jew is clearly lacking. And this stems from the fact that we fall short spiritually. Although we davven with a Minyan, study Torah, and so on, our heart is not in it. It’s difficult to say it, but we’ve succumbed to a self-centered lifestyle.
Perhaps we need to review Tanya, chapter 32, and reflect upon its message persistently. Until, with the help of Hashem, it truly sinks in.
Posted by Yehoishophot Oliver at 10:59 PM

Email ThisBlogThis!Share to TwitterShare to FacebookShare to Pinterest
labels: concepts in Tanya, Eretz Yisroel, love for a fellow Jew, terror