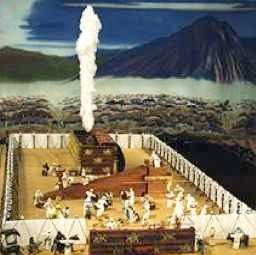 Hashem exhorted the Jewish people, “Make for Me a Mishkan, and I will dwell in their midst.”[1] Chassidus quotes earlier sources[2] that explain that the reason that it doesn’t say “I will dwell in its midst” is to allude to Hashem’s desire to dwell “in their midst”—that every Jew make a Mishkan for the Shechinah, the divine presence, within his or her inner self. Thus, all the details of the Mishkan provide a lesson for us in our divine service, alluding to the correct approach to revealing the Shechinah within.

The Torah relates[3] that Betzalel decided to make the Mishkan first, and then the keilim, the vessels to be used there. This represents the two stages of within: The external structure of the Mishkan—intellect and the keilim—emotions.

Back to the lesson from Betzalel’s preferred order in constructing the Mishkan.

The Mishkan was, of course, a kind of edifice. Now, an edifice benefits the person by providing shelter and the like, but encompasses the person and does not relate to those within it on an individual level. This represents the concept of an ohr makif—a kind of influence that affects the person to a certain degree, but remains superficial, and does not permeate that person’s inner self.

In contrast, the keilim, each of which is designed to hold certain contents in a measured fashion, represent the concept of an ohr pnimi—a kind of influence that is measured to fit the level of the recipient, and therefore permeates and transforms that person’s inner self.

This may seem odd to some. Chassidus typically describes intellect as an ohr pnimi, for a teacher must deliver his or her teaching to the student in a way that the student can comprehend. Yet in the context of changing one’s inner self, intellect is described as an ohr makif, while emotions are called an ohr pnimi.

The reason is that although one typically identifies both by one’s intellect and emotions, of the two, emotions cut to the core of identity. We are defined by what we feel far more than by what we understand.

For instance, when a person understands intellectually that a certain course of action is wrong, but his emotions are excited by it and attracted to it nonetheless, we would correctly define this person by his desires and not by his abstract understanding. Moreover, emotions are the key to thought, speech, and action, so only through reaching suitable emotions can one come to proper behavior.

This is the deeper meaning of the verse, “Know today, and take to heart, that Havayeh is Elokim.”[6] First and foremost, “know today”—study about Hashem’s greatness until you reach hispa’alus sichlis—intellectual excitement. This reveals the Neshamah’s intellect.

But don’t suffice with “know today.” Go further: “Take to heart”—take the excitement at what you studied from the realm of abstract theory down into the emotions, to hispa’alus shebelev—excitement of the heart. Bring the heart to become passionate with whatever emotion ought to emerge from the concept that you learnt, whether love of Hashem, fear of Hashem, or the like.

Then one may merit a personal fulfillment of the next phrase: “Havayeh is Elokim.” This means that then the most sublime aspect of the Shechinah becomes revealed in one’s innermost self, and this constitutes the ultimate fulfillment of “I will dwell in their midst.”

To be continued. Next, G–d willing, I need to explain the meaning of the inner revelation of “Havayeh is Elokim” in the heart.

~~~~~~~~~~~~~~~~
Like what you read? The articles I write take a lot of time and effort. Please contact me to sponsor an article for (at least) $36 in honor of the birthday, wedding anniversary, or yarhtzeit of a loved one, or for a refuah shleimah or the like. Also, see here concerning the tremendous merit of supporting the dissemination of Chassidus, and the blessings that one receives for doing so.
Posted by Yehoishophot Oliver at 11:24 PM

Email ThisBlogThis!Share to TwitterShare to FacebookShare to Pinterest
labels: Divine Soul, intellect and emotions, makif vs. pnimi, the Mishkan, the Mittele Rebbe's teachings