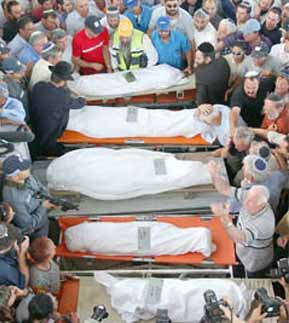 Mourners surround the corpses of Tali Hatuel, 34, who was eight months pregnant, center, and her four daughters, aged two to 11, at their funeral. 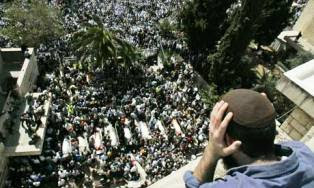 Mourners at the funeral of the Merkaz HaRav Yeshiva students. 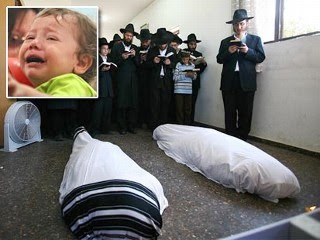 
Today we marking the commemoration of a year since the brutal slaying of the Merkaz HaRav Yeshivah students while studying the holy Torah. And yet again I am reminded of other massacres, of other names, of so many names, so many shattered lives, that I am overwhelmed at the thought of it.
I’m looking forward to the day of judgment.
I want to see justice. Justice for every Jew slain. For every Jew maimed, injured, disfigured, handicapped. For every Jew who was physically harmed in any way. For every Jew put in fear, traumatized. For every Jew whose family life or whose mental health was affected. For every Jew bereaved, mourning, hurting—which, in a broader sense, means justice for every single Jew. Justice for the Jewish people, whom they intend to attack by attacking individual Jews. And justice for Hashem, Whose people they dared to harm.
It’s not that I like seeing people in pain—I don’t. But I like seeing justice carried out against the enemies of Hashem and the Jewish people. “When the wicked are destroyed, there is joy” (Mishlei 11:10). And I want it to be justice “measure for measure” (Sanhedrin 90a).
When we refer to a Jew who has been murdered because he was a Jew, we call him a kodosh, a “holy one,” and we say “may Hashem avenge his blood.” I’m looking forward to the fulfillment of this. To the day when the true value of the Jewish people will be revealed, that they are Hashem’s Chosen, and all the scum who dared to harm them will receive their just desserts in a most public manner, for all the world to see. And we will see the final fulfillment of Torah’s words “Sing aloud, nations, of His people; for He does avenge the blood of His servants, and does render vengeance to His adversaries” (Devarim 32:43). May it happen today, with the coming of Moshiach.
Posted by Yehoishophot Oliver at 5:59 PM