Don't slide down the slippery slope 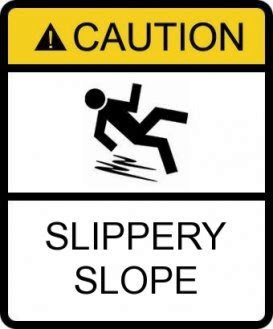 I once heard the following analogy at a farbrengen:


Once a burly Russian traveled to a market, but arrived several hours too early, so he fell asleep sprawled out over his merchandise.

As he was sleeping, he felt a tug on his foot. Someone was pulling off his boot. He waited, thinking to himself: “I’m a big, strong guy; as soon as he finishes taking off my boot, I’ll sock it to him.” But the stranger only removed part of the boot. “Ha!” the man thought. “He realized that I would hit him, so he left,” and he went back to sleep.

A while later, he felt a tug on his other boot. He waited again, imagining how forcefully he would punch the thief if he would dare to take off the boot. But again the thief left the boot partially on. “A smart thief!” the man thought. “He realized again that it’s unwise to start with me!” And he fell asleep again.

A while later he felt his expensive fur coat, which had been protecting him from the heavy Russian winter, being pulled off him. He was about to jump up and chase after the thief, but then he realized that he couldn’t. In order to move, he would have to put his boots on properly, which would take a minute. He could also take them off, but that would also take time, and he wouldn’t be able to run as well without his boots. Either way, he could not stop the thief from escaping.

The evil inclination is very cunning. It knows that if it attempts to entice the person to commit a heinous sin, it has little chance of success. So it entices him to commit an apparently trivial infraction. And then another. And another. Each infraction weakens him spiritually in a way that is so gradual that it is sometimes imperceptible. But the cumulative effect of these sins pulls him down until he is so low that when the evil inclination entices him to commit the heinous sin, it is all but impossible to resist the temptation.

As soon as we make the decision to allow ourselves to start “cutting corners,” making concessions, and treating certain Torah requirements and values as unimportant, or less important, we create a “slippery slope” from which it becomes increasingly difficult to escape.

How can we be vigilant against this devious trick of the evil inclination? By adhering to the Talmudic dicta: “Be as careful with a light Mitzvah as with a severe one” (Avos 2:1) and “Do not sit and weigh up the Mitzvos of the Torah” (Devarim Rabba 6:2).

But when will a person truly feel that every Mitzvah, Rabbinic stricture, and even Jewish custom is precious and must not be overlooked? Only when he feels strongly that every single part of the Torah and Mitzvos is holy because it is from G–d. This feeling does not come automatically; it must be consciously cultivated.

In particular, the teachings of Chassidus Chabad—which explain G–d’s greatness in a fully comprehensible way, and teach us the wondrous impact that a Jew makes on the world when he performs Mitzvos—have the special quality of imbuing a person with this sense of the holiness of every single aspect of Torah and Mitzvos.
Posted by Yehoishophot Oliver at 10:55 AM