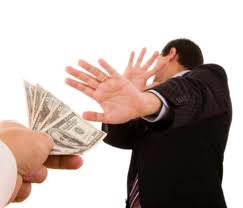 The intellect knows that it is liable to be blinded by self-interest, and so it seeks to divest itself of this corrupting influence.

To explain, the Torah warns us: “Bribery blinds the eyes of the wise.”[1] No matter how refined, knowledgeable, and experienced a judge may be, when he stoops to take a bribe, he creates an inner emotional bias that makes it impossible for him to judge fairly.

If at first the judge was inclined to rule against the accused, accepting a bribe to rule leniently is not only detrimental because it constitutes a travesty of justice. It also sways his judgment, inducing his mind to devise of all kinds of pretexts to acquit the accused.

Likewise, consider two parties who come to court, each one pleading his side. Even when the case is highly complex and two-sided, each litigant will present a long list of claims in his own favor—including elaborate, advanced, and even innovative arguments.

Each one is convinced beyond any shadow of doubt of his own righteousness, even to the extent that he is simply incapable of acknowledging any merit in his opponent’s claims. Moreover, instead of partially conceding the perspective of his opponent, he turns around his opponent’s every uargument to further bolster his own case. In fact, even simple, completely uneducated people can come up with such arguments.[2]

The reason for all this is the tremendous emotional investment each side has in winning the case.

The challenge of the judge is to view the case with zero personal bias and thereby apply the law to the specifics of the case before him faithfully and correctly.

Likewise, Hashem endowed us with intellect and charged us with the task of using it to assess the world and our fellow in a mature, true, and objective manner.

When emotions are strong, the person is at risk of rendering intellectual decisions that are incorrect, and ethical decisions that are unjust. This danger is completely unrelated to the extent of one’s intellectual development. No matter how high his IQ and how vast his knowledge, if his emotions are allowed to affect his intellect, all his arguments will be false. On the contrary, the brighter he is, the greater the danger that he may persuade others to adopt his false ideas.

Generally speaking, an immature person relates to the world through his emotions, and his intellect is not true intellect, but intellect recruited—rather, hijacked—for the benefit of his emotions. In the language of Chassidus, only the intellect of his Bestial Soul is active. This is also known as mochin de’katnus, “immature intellect.”

In contrast, an intellectually mature person assesses every issue that he analyzes objectively. Not only is his judgment not colored by his feelings, but even when his personal feelings directly contradict the conclusion warranted by intellect, he reaches the conclusion correctly.

In short, his intellect is not controlled at all by his emotions, but only by the dictates of the faculty of intellect.[3]

This is not to say that this person’s emotions are nonexistent or even that that they are weak. Nor is refining his emotions a prerequisite. One can possess fiery, unrefined emotions, and still possess an intellect with the power to utterly disregard those emotions. This is maturity in intellect. In the language of Chassidus, this is a person whose Nefesh HaSichlis truly dominates. This is also known as mochin de’gadlus, “mature intellect.” (See here and here.)

However, it should be noted that although some people are more naturally gifted with the ability to reach this level than others,[4] one can only truly attain it when one predicates the use of one’s intellect on faith in Hashem and humble submission (“bittul”) to His will as revealed in our holy Torah.[5]

~~~~~~~~~~~~~~~~~~~~
Like what you read? The articles I write take a lot of time and effort. Please contact me to sponsor an article for (at least) $36 in honor of the birthday, wedding anniversary, or yarhtzeit of a loved one, or for a refuah shleimah or the like. Also, see here concerning the tremendous merit of supporting the dissemination of Chassidus, and the blessings that one receives for doing so.

Posted by Yehoishophot Oliver at 8:59 PM