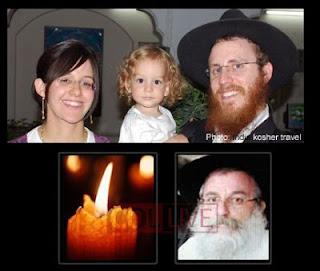 This is a glaring, chilling “coincidence.”

On Rosh Chodesh Kislev 5769, Gavriel Holtzberg and his pregnant wife, Rivkah, shluchim to India, were slain by terrorists and died al kiddush Hashem, along with others. May their blood be avenged.

Just now, on the very same day in 5773, four years later, Mira Sharf, shluchah to India, also pregnant, was slain by terrorists and died al kiddush Hashem, along with others. May their blood be avenged. (Her husband Shmuel, yibadel lechaim tovim, shliach to India, was critically injured, but survived, as did her children. May they have a full recovery and be comforted.)

Our first response should be to cry out, “Hashem, ad mosai?!” Enough suffering in golus!

But then we must take notice. This is an open sign of Hashem’s hashgachah, His direct involvement in our lives. What is He trying to tell us, the worldwide community of chassidei Chabad in particular?

I don’t presume to know for certain what the lesson might be. But Chazal say, “If one sees suffering coming upon himself, he should inspect his deeds.”[1] He should make a cheshbon nefesh, and see if he can find any sins that might have caused this misfortune, and do teshuvah for them.

This applies not only to the Jew as an individual, but also to the Jew’s community, as the Rambam rules:[2]


It is a positive obligation stated in the Torah to cry out to Hashem in prayer whenever a great calamity should befall the community. … This is counted among the paths of repentance, that when a calamity arrives and people cry out and sound the Shofar, everyone will know that it was because of their wrongdoing that this evil befell them … and this will cause the calamity to be removed from them. If, however, they do not cry out … arguing instead that this event happened to us as part of the natural way of the world and that the calamity happened by chance, this approach is cruel, because it causes people to persist in their wrongdoing and thus brings about further disasters … . Moreover, the Sages ordained that people should fast over every calamity that overtakes the community, until Heaven shows them compassion.

So when tragedy befalls a community, it’s the fault of the entire community, and the community must know that. (It’s certainly not the fault of any non-Jew, although that evil scum will certainly get his just deserts, for no non-Jew has the power to harm any Jew unless Hashem so decreed it. As the Gemara states,[3] the Beis HaMikdash would not have been destroyed unless “their Mighty One had given them over, and Hashem had trapped them.”[4])

This is true of any tragedy in the community (as I write here), but all the more so when it occurs in a way in which we see Hashem’s hashgachah so openly, as is the case here, Rachmana litzlan.

So let us not let this tragedy pass us by, in effect treating it as if, chas vesholom, “the calamity happened by chance.” Let us search within, consult with our friends, and turn to our venerated Rabbonim and Mashpi’im in earnest: What can we do to improve as chassidim? Are there areas in which we are falling short, and even going against what the teachings of Chassidus demand of us, Rachmana litzlan? In which areas are we not devoting ourselves to do perform good deeds—and and the hora’os of Chassidus and the Rebbe in general, and his call to spread Yiddishkeit and Chassidus far and wide in particular—as much as we could? And let us make good resolutions to change, and follow them through, with the help of Hashem.

This is the true Jewish response to suffering. Let’s do it, and may Hashem see our sincere teshuvah, have mercy upon us, spare us from all future harm and sorrow, and send Moshiach now.


Like what you read? The articles I write take a lot of time and effort. Please contact me to sponsor an article for (at least) $36 in honor of the birthday, wedding anniversary, or yarhtzeit of a loved one, or for a refuah shleimah or the like. Also, see here concerning the tremendous merit of supporting the dissemination of Chassidus, and the blessings that one receives for doing so.
Posted by Yehoishophot Oliver at 9:53 AM