More on love for fellow chassidim 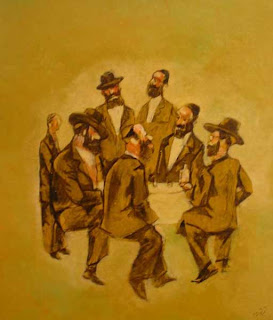 In the HaYom Yom of 24 Teves, the Yom Hillula of the Alter Rebbe, it is written:

[The Previous Rebbe related:] My grandfather (the Rebbe Maharash] asked the Tzemach Tzedek: What did grandfather [the Alter Rebbe] intend with the “ways of Chassidus” ... ?

The Tzemach Tzedek answered: The “ways of Chassidus” are in order that all chassidim be like one family, with affection, as Torah teaches.

In my own words with some explanation:


What are “the ways of Chassidus”? This is a broad term that refers to various practices other than study of Chassidus emphasized as appropriate Chassidic conduct. In particular, the Previous Rebbe says (Likkutei Dibburim, Vol. 3, pp. 848-850) that the ways of Chassidus include Avodas HaTefillah, attending regular farbrengens, singing Niggunim, and telling stories of chassidim and of Rebbeim. It would seem to me that minhogei (customs of) Chabad also fall under this rubric.


The Rebbe Maharash says in the above HaYom Yom that the Alter Rebbe’s intent in establishing the various ways of Chassidus was a yet deeper goal, namely to unite chassidim through these practices, bringing them to a deep love for one another, “like one family.” The analogy with a family appears clear: All chassidim are like children of the Rebbe, their father.

1. It is not remarkable that a farbrengen is related to developing ahavas Yisrael and ahavas chassidim, for a farbrengen necessarily involves relating to others. The chiddush here appears to be that Avodah according to Chassidus should not be exclusively self-focused. There should be a sense that engaging in this activity, although it may not directly involve others, should bring one to a deeper identification with all fellow chassidim. Similarly, the act of becoming inspired from a chassidishe niggun and the like or story should be permeated with this feeling of community.
2. When one meets a fellow chossid one should immediately feel a special affinity, a bond, a warmth, because “we are all the children of one father.” This is comparable to relating to fellow family members, where one feels a natural closeness and not a feeling one needs to consciously evoke.


Granted, the relationship with family can and should be further enhanced through proper reflection on the nature of one’s shared bond, and the same applies to one’s relationship with fellow chassidim. Still, that is a later stage. The core of the relationship to the community of chassidei Chabad (the statement in the HaYom Yom above was said specifically regarding the Alter Rebbe, so it would seem that one cannot extrapolate that this principle is necessarily applicable when relating to members of other Chassidic circles as well) is that a natural affinity ought to exist between fellow chassidim. If this feeling is missing, G–d forbid, this is a cause for serious concern.
Posted by Yehoishophot Oliver at 8:02 PM

Email ThisBlogThis!Share to TwitterShare to FacebookShare to Pinterest
labels: love among chassidim, the Tzemach Tzedek's teachings, ways of Chassidus