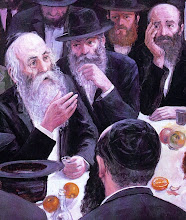 The Yom Tov of Rosh Hashanah of Chassidus lasts for two days. Chassidim mark not only Yud-Tes Kislev, but also Chof (20) Kislev, and even refrain from reciting Tachanun on that day. What event occurred on Chof Kislev that is so significant that it warrants that this day be regarded as a day of liberation and celebration on a par with Yud-Tes Kislev?


On this day the Alter Rebbe, en route to his home, got stuck in the house of a misnagid who caused him tremendous pain through his callous and derogatory questions and challenges. Finally, after much searching, the chassidim found the Alter Rebbe and escorted him out.[1]


Thus, on Chof Kislev, we celebrate the fact that the Alter Rebbe was freed from the house of the misnagid. But how can being stuck for three hours, and in the home of a Jew, compare with suffering in prison for fifty-three days?


This demonstrates that for the Alter Rebbe, this experience was so painful that it was comparable, and in a sense even more difficult, than the imprisonment.


For when a Jew, chosen and elevated, opposes the forces of holiness, it is much worse than when a non-Jew does so.


What is the lesson from this?


Every one of us has two types of evil inclination: One that is comparable to a non-Jew[2]—the non-Jew within us, that seeks to entice us to commit various sins, G-d forbid. But then there is another evil inclination, one that is “Jewish.” It allows one to study Nigleh, to follow Shulchan Aruch, and even to follow various stringencies, but it insists that one do so as a misnagid. It resists studying Chassidus, and most of all, it resists the inner change that Chassidus can bring. It distracts the person in whatever way possible from taking the time to develop himself or herself as a chossid, and always has up his sleeve a sophisticated explanation for how something else takes priority.

And even when the person does follow many practices in the path of Chassidus, this inner misnagid seeks to limits the extent of the involvement, to limit the constant inner growth that is a vital part of being a healthy chossid. For some, it entices the person to study only avodah’dike ma’amarim (those that focus on personal growth) and not haskalah’dike maamarim (which focus on intellectually grasping Hashem’s greatness). Others suffer from the opposite malady. For some, it encourages them to davven, but not learn; to others it does the opposite. And so on.