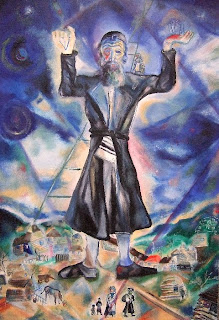 Someone wrote to me asking about how to go about learning maamarim (Chassidic discourses, or a maamar in the singular).

It’s best to start with more basic texts such as the Tanya, Derech Mitzvosecha, Kuntres Uma’ayan, and the like.

Obviously it is best to learn with someone who has a lot of experience and can provide background and explanation for difficult expressions and concepts. However, even if such a chavrusa (study partner) is unavailable, one should still learn Chassidus.


When beginners to Chassidus encounter enigmatic kabbalistic expressions, they conclude that learning on their own is pointless. However, I believe that this is a mistake. If you come across phrases and terms that you don’t understand, don’t give up. Rather, make a note of the question, skip that sentence, read on, and try to understand as much of the maamar as possible. Hopefully an occasion will arise to discuss the question with someone more knowledgeable, but even if it doesn’t, the study was worthwhile. It’s not all or nothing.

As one develops one’s general knowledge, more and more terms and references will become understood. In contrast, if one gets bogged down with every expression and nuance, one will cover little ground.

It’s like arriving in a new city. First one should get one’s bearings in general, by learning the locations of the main landmarks, such as the shul, the mikveh, the local kollel and yeshivah, and so on. Once one has the general picture, he can then fill in the details.
Posted by Yehoishophot Oliver at 8:44 PM

Email ThisBlogThis!Share to TwitterShare to FacebookShare to Pinterest
labels: getting started, study of Chassidus