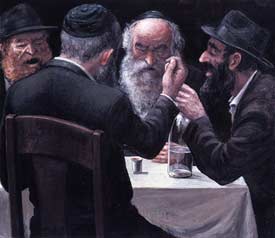 This reminds me of the aphorism of my father in law, the [Previous] Rebbe, who related that when he began his involvement in business, he asked his father that “he should hot have the attitudes of married people” [in the original, “baalhabatishe hanochos”].

When he related this to me, he added, “The attitudes of married people [“baalhabatishe hanochos”] are filthy.” Obviously he meant this in a more subtle sense, for he was referring to married people who observe Torah and Mitzvos fully, and yet, as Chassidus explains, they are in “Egypt”—which represents straits and limitations [the Hebrew word for Egypt, Mitzrayim, is etymologically related to meitzarim, straits]—their entire lives. For all through their lives today is like yesterday, and tomorrow like today, and even the distant future will be no different. Moreover, they regard the very aspiration for change as crazy; i.e., outside of the realm of healthy intellect.

In this holy letter, the Rebbe explains that one of the main dangers of the lifestyle of a married person (discussed earlier here) is that he or she ceases to yearn and strive for change. The Torah constantly urges a Jew to “rise higher in matters of holiness” (Berachos, 28a), and never remain static. However, the lifestyle of a married person (for the various reasons explained above) naturally fosters rigidity and coldness in matters of spirituality, and thus a married man or woman typically regards any deviation from this norm as, well, nuts. The Previous Rebbe regarded this aversion to inner change harshly.

In contrast, a true life of spirituality demands constant positive change and growth. This starts with a deep yearning, and culminates in concrete action.

The Previous Rebbe explains that this feeling was once typical, and calls us to restore this communal attitude:

... Although amongst Chabad chassidim there were different levels of knowledge, they all did Avodah. They worked on themselves. The regular working on oneself was based on the foundation that the way one is today is not good, and we have to become completely different.

I have already told what the chossid, Reb Gershon Dov [of Pahar], would often say after lengthy meditation, for he had tremendous ability for deep concentration. After the evening prayer and reciting the Shema upon retiring, which would often turn out to be in the late hours of the winter nights, [he could be overheard saying to himself]: “Do you hear, Gershon Ber? We have to wake up completely different.”

This demonstrates that in fact the intense dissatisfaction with one’s current level and the constant desire for inner change lie at the core of the Avodah (divine service) that characterizes Chassidus Chabad—the antithesis of “the attitudes of married people” described above.
Posted by Yehoishophot Oliver at 9:37 PM