Teshuvah: Regaining Our Passion for Truth 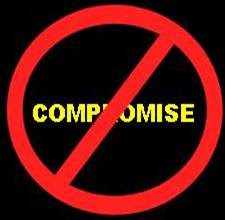 Teshuvah: Regaining
Our Passion for Truth

The greatness of youth is its idealism. A resolute, unremitting, unashamed refusal to compromise one’s standards and principles, even in the face of tremendous hardship and opposition—nay, specifically in such circumstances.

There are two kinds of compromise.


1.       Externally-imposed compromise. This is when one is apparently forced into a compromise. He would never act this way otherwise, he says, but what can he do? He is left with no choice. His circumstances dictate that he lower his standards, cut corners, settle for less. Life is not a fantasy and he can’t live in the clouds. He must grow up and live in the real world, which means that sometimes he must do things he finds objectionable for the sake of some purportedly greater cause.

2.       Self-imposed compromise. As time goes by, he starts slipping. He used to be careful to observe every single custom meticulously, every dikduk kal, but now it seems like so many ... minutiae. Of course, he’s still frum, but it no longer seems so crucial to be so ... farfrumt and farchnyokt as it did back when he was young, headstrong, and naïve. After all, almost no one else truly lives like that their whole lives, except for a handful of social outcasts, people who never grew up. He’s matured steadily over time, and maturity means mellowing out, being more “chill,” not taking yourself so seriously, and learning to have a little fun. And if it means cutting a corner, then no harm is done. No one else cares, nor will they find out, anyway. And as for Hashem? He’s all-forgiving, so He won’t mind either, surely.

Even in the first case, when the compromise was externally imposed, the person adjusts to his compromised state, and comes to feel that compromise is no big deal, and perhaps not even shameful. In any case, he learns to accept compromise as a normal part of life. And then, over the course of time, it is very likely that he will decline from the first kind of compromise to the second, G–d forbid.

When we live a life in which we are ever-cautious not to fall prey to all-too-human weakness, and persist in maintaining our personal standards courageously regardless of how others around us are acting, and the direct or indirect pressures that they may be placing upon us, then we are truly alive.

This is much more attainable when a person is physically young, because he has not yet gone out into the “real world” and had to spend all day in the company of spiritual sellouts, in external circumstances that test him, that play with his mind and wear him down until he starts to truly believe the lie that the materialistic society sells him from every direction that he has no choice but to compromise—to sin “just a little.”

But there is no such thing. You can’t sin “in moderation.” Nor can you compromise “in moderation.” No, once you start down that road, know that you’re making deals with terrorists, dancing with the devil, and inevitably “one sin brings another in its wake.”[1]

So then the relentless downward spiral—yes, the slippery slope—begins, and you go from being tainted to becoming slowly but surely corrupted. Our sages warn, “When one sins once, and again, he feels as if it is permissible.”[2] What he earlier recognized as a sin, he starts to view as a mere compromise, and then what he had previously viewed as a compromise becomes completely acceptable. And then he becomes even further desensitized, so that from feeling “as if it is permissible,” it becomes felt to be outright permissible, until it even becomes a Mitzvah! (See also here and here.)

Don’t fall into this trap.

But if you are no longer in your early twenties, chances are that you have, and that your idealism has declined (assuming you were fortunate enough to go through a stage of youthful idealism in the first place).

So now you need to uncorrupt yourself. Start with some brutal honesty. Idealism and truth-seeking always demand it, and honesty with oneself is needed first and foremost.

Stop living in denial. Admit it, you sinned. You didn’t merely “compromise” or “make mistakes” due to “circumstances beyond your control.” You’re not a passive victim, a helpless object, a leaf blown by the wind. That’s nonsense. Hashem gave you free choice. You were tested, and you failed. Yes, the test may have been very, very difficult. But so what? You’re still fully responsible for your conduct. And when you compromised, you corrupted, debased, and dehumanized yourself.

Now that’s not to say that everything you do is wrong; on the contrary, it is quite possible that most of your behavior is worthy. But that is neither here nor there. Grow up. Mitzvos don’t excuse aveiros.
Once you have truly accepted that you sinned (see here), then you can do Teshuvah, be cleansed, and change your ways. Then idealism—and its corollary, unapologetic disdain for compromise in all its ugly and insidious manifestations—can return.

Then your age no longer matters (as much). Passion for the absolute truth of the Torah of truth, and a willingness to fight for it, to sacrifice for it, to die for it and to live for it, to surrender oneself to it with every fiber of one’s being, to do everything in one’s power to live up to it and disseminate it to one and all with confidence and conviction—all these youthful feelings can then thrive again.

And when you translate this truth into your personal life, you are also able to lead and inspire others, to serve as a shining role model, a beacon of truthfulness, integrity, and joyful sacrifice for your family and community, filled with the enthusiasm and vigor of youth.

Dedicated in honor of the birthday of my dear son, Shneur Zalman ben Atarah Arielle, on 29 Av.

___________________________________
Like what you read? The articles I write take a lot of time and effort. Please contact me to sponsor an article for (at least) $36 in honor of the birthday, wedding anniversary, or yarhtzeit of a loved one, or for a refuah shleimah or the like. Also, see here concerning the tremendous merit of supporting the dissemination of Chassidus, and the blessings that one receives for doing so.
Posted by Yehoishophot Oliver at 1:23 AM