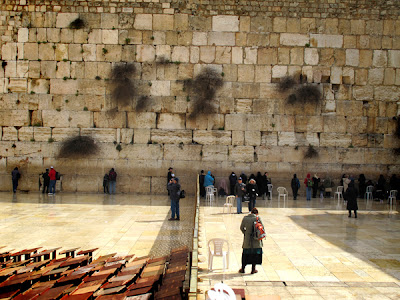 We can also observe the phenomenon of well-meaning but misplaced religious feeling in a contemporary context, and on a far more basic level than was described in the previous installments of this essay.

Secular attitudes combined with ignorance of and sometimes outright disrespect for Jewish law have led many to follow practices that are in violation of the traditions of our holy Torah. And although they outright reject the tenets, laws, and customs of the Judaism of their ancestors, they bizarrely claim to be following it.

E.g., some people become enthusiastic about prayer—which is, indeed, a very sublime Mitzvah—but then pray in a mixed service without a mechitzah, or pray using a liturgy that they made up themselves while rejecting the divinely-inspired, required liturgy formulated millennia ago by the Anshei Knesses HaGedolah.

“Why do the fine points matter so much?” they protest. “The main thing is that we’re inspired in serving Hashem, and Hashem isn’t so petty—He loves us and hears us whether we follow a prescribed text or not!”

One recent high-profile example of this may be the “Women of the Wall,” who insist on their “right” to violate the traditional synagogue laws adhered to at Judaism’s holiest site, the Kosel. (My hesitation in including them in this category is that it seems that for many of them, their fervor is in fact political, not religious.)

This is comparable to approaching a human king or a prime minister with an impassioned plea that he spare one’s life, but with the qualification:


I know that your majesty has issued certain edicts, but I’ve decided to flout them: For instance, although I know that you’ve declared that when we come before you, we should follow the dress code that you prescribe, I don’t care—I’ll dress as I please when I come to ask you for a favor. I also know that you’ve explicitly stated that you want us to present our requests to you using a prescribed text, but I insist on expressing my individuality, and asking you for what I want in my own way. Yet I expect your highness to grant my heartfelt request regardless, because after all, you are so very merciful indeed.

How outrageous. What human king would tolerate such a request, never mind accede to it? How much more so is such an attitude completely inappropriate when one approaches the King of all kings, Hashem.[1]

In conclusion, on every level, the Jew should be careful to ensure that his spiritual, inspired feelings for Hashem are not expressed inappropriately, whether in the form of somehow mistreating others, or violating Jewish law. He attains this by strengthening his acceptance of Hashem’s absolute sovereignty and authority—kabolas ol Malchus Shomayim. Then not only will these feelings not result in inappropriate behavior, but they will inspire one to much more careful observance of halacha and much more sincere devotion towards one’s fellow Jew.

____________________
[1] A truly courageous rabbi will find the words to make sure his congregants are aware of this. See a letter of the Rebbe on the responsibility of a congregational rabbi to object to changes in Judaism here.

Read this essay in full on Scribd here!


Dedicated in honor of the ninth birthday of beni bechori, Shneur Zalman ben Atara Arielle, on 29 Av. May he grow lTorah, l'Chupah, ulemaasim tovim, and become a chossid, yerei Shomayim, and lamdan!

___________________________________
Like what you read? The articles I write take a lot of time and effort. Please contact me to sponsor an article for (at least) $36 in honor of the birthday, wedding anniversary, or yarhtzeit of a loved one, or for a refuah shleimah or the like. Also, see here concerning the tremendous merit of supporting the dissemination of Chassidus, and the blessings that one receives for doing so.
Posted by Yehoishophot Oliver at 6:27 AM