Chanukah: A titanic conflict of wisdoms 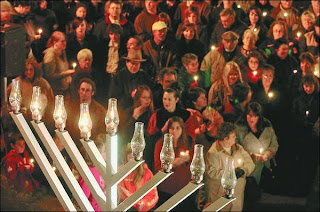 Chanukah: A titanic conflict of wisdoms

Although secular wisdom can be very profound, Torah wisdom is so vastly superior to it that the Zohar comments[2] on the verse, “And I saw that there is an advantage to wisdom over foolishness”[3] that King Solomon was describing the greatness of “wisdom”—Torah, over “foolishness”—secular wisdom.

To explain, wisdom of holiness engenders bittul—self-effacement and humility, while wisdom of Kelipah engenders yeshus—egotism and arrogance. This also translates itself into one’s interaction with others: yeshus leads to conflict and division, while bittul fosters harmony and unity. The reason for this difference is as follows:

The underlying purpose of wisdom of holiness, Torah, is to explain how the universe was created yesh mei’ayin, something from “nothing”—i.e., from pure G–dliness. Moreover, even after being created, everything in the universe depends absolutely upon this G–dliness for its ongoing existence, and so even now, the true reality of the universe is G–dliness.[5] The awareness of our total dependence upon G–d permeates everything we do with faith in Divine Providence. Likewise, since this wisdom focuses on bittul, studying it imbues one with bittul—with the willingness to nullify oneself, i.e., humility. Thus, Torah wisdom is indeed true wisdom.

In contrast, wisdom of Kelipah, secular wisdom, explains not the ayin, pure transcendent G–dliness, but the yesh, the egotistical world that feels itself to be independent from its source in G–dliness and self-sustaining, G–d forbid. Since this wisdom focuses on yeshus, on the universe as it feels itself independent from G–d, studying it imbues one with yeshus—with arrogance and a sense that one does not truly need G–d (G–d forbid). Ultimately, this leads to heresy—total denial of G–d and rejection of His providence, may G–d save us. Thus, secular wisdom is indeed true foolishness.

Since Torah engenders bittul, it imbues an even greater measure of bittul in the intellect, bringing one to true objectivity, and it even elevates the self-focused emotions to a state of bittul.

Conversely, secular wisdom, which engenders yeshus, brings the emotions to be even more self-focused than they would have been otherwise—i.e., it fosters coarseness and wicked character traits. What’s worse, it even corrupts the otherwise truth-seeking intellect to a state of selfishness and arrogance.

This is the reason that many great gentile sages were notorious for being extremely corrupt and decadent. Their wisdom did not translate itself into more refined behavior; on the contrary, they were more immoral than others of average intellect. The reason is, as explained, that secular wisdom instills and bolsters coarseness and arrogance.

(It should be noted that the above explains the natural impact of each of these wisdoms. However, if one learns Torah without fear of Hashem, G–d forbid, it may become an “elixir of death,” having a very negative effect on the person[6]; conversely, if one is strong in one’s fear of Hashem and studies secular wisdoms in the appropriate way, with the right intentions, they can be beneficial.[7])

Like what you read? The articles I write take a lot of time and effort. Please contact me to sponsor an article for (at least) $36 in honor of the birthday, wedding anniversary, or yarhtzeit of a loved one, or for a refuah shleimah or the like. Also, see here concerning the tremendous merit of supporting the dissemination of Chassidus, and the blessings that one receives for doing so.
Posted by Yehoishophot Oliver at 9:42 PM