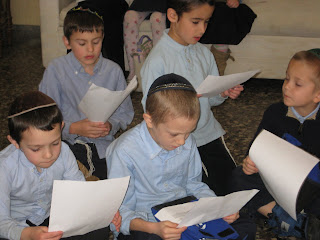 As long as the Jewish people remain in exile, “in every generation, they [the gentile nations] rise up against us to destroy us.”[1] In some ages, our enemies sought to destroy us by slaying the Jewish body, G–d forbid. In the time of the Greeks, however, their method was to entice the Jewish people to adopt the Greek culture and assimilate into their society, with the ultimate goal of bringing them to cease to exist as a separate nation, G–d forbid.

Thus, the Medrash relates[2] that the nations came to their wise man, Avnimos, and asked him whether they could prevail upon the Jewish people to assimilate with them. Avnimos replied: “Go and frequent their houses of pray and houses of study. If you find children chirping with their voice [in Torah study], you will not be able to defeat them. But if not, you will be able to defeat them.”

However, teaching children Torah only has the power to protect Jews from such harm if it is taught in a pure, uncompromised manner, permeated with fear of Hashem. Such an education will bring the Pinteleh Yid, the core of the Jewish children’s pure Neshamos, to be revealed in their hearts, endowing them with the inner fortitude to be faithful to Hashem and His Torah for their entire lives.

May we draw strength and inspiration from Chanukah to each do our part to promote a pure, uncompromising Torah education for every single Jewish child throughout the entire year!