"Engrave" G-dliness Into Your Very Being 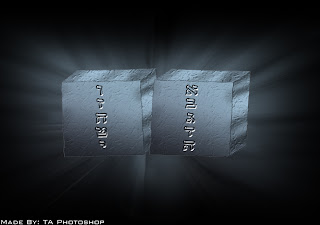 "Engrave" G-dliness Into Your Very Being

In contrast, in the case of engraved letters, only one entity exists—the rock. The letters have no separate existence from the rock upon which they are engraved, and so the two are inseparable.

The Luchos had a further quality—one that was miraculous. They were carved all the way through to the other side.[3] This required a miracle, for in such a case, the centers of the round letters samech (ס) and the final mem (ם) could not otherwise have remained suspended in mid-air.[4] This is also why the Luchos were called “Luchos of the Testimony,” for the manner in which they were inscribed testified to their divine origin.[5]

This represents a further level of unification with G–dliness, for in regular engraving, only the surface of one side of the stone is engraved, while the other side remains untouched. But since the letters of the Luchos penetrated through to the other side, no part of the Luchos remained unaffected by the letters.

What is the deeper significance of this, especially in light of the principle that “Hashem never performs a miracle unnecessarily”[6]? The Luchos were the ultimate physical embodiment of the word of Hashem. Thus, they represent the Torah as it exists in its supernal source. On this level, “The Torah and Hashem are entirely one”[7]—the letters of Torah are utterly united with pure G–dliness.

However, when the Torah descends into our world, it becomes vested in the Written Torah—it becomes inscribed as ink on parchment. So although the letters of the Written Torah are very holy, once they descend into our lowly world, they do not retain the awesome holiness of their source.

This also teaches us how to study Torah. It is not enough to study Torah and unite with it by merely comprehending and remembering it well, for then the holiness of Torah is still superimposed on the person—akin to written letters.

Rather, just as engraved letters become one with the substance upon which they are engraved, so should the Torah one learns become one with his being. Moreover, just as the engraved letters in the Luchos cut all the way through to the other side, permeating every aspect of the Luchos, so should the Torah that one learns permeate every aspect of his being.

This is the deeper meaning of the verse, “If you go in my chukim [statutes],”[8] which Rashi interprets to mean “if you toil in Torah.” Since the word chukim is related to the word chakikah, engraving, on a deeper level, the verse is exhorting us to learn Torah in a way that it permeates our being, as discussed above.

When the Torah permeates us fully, we will naturally toil in our study of it, for when something permeates a person, he is willing and eager to exert effort for it, for he feels that it is his. But if the thing does not permeate him, he will only trouble himself to do as much as is technically required. This is along the lines of the difference between an employer and an employee—even the most devoted employee will not exert himself to the extent of the employer, for the employer knows that it is his business.

And from one’s toil in Torah study, this filters down into one’s observance of Mitzvos—that the Mitzvos are all kept in a way of “engraved letters”—they permeate the entire being of the Jew who performs them.


"Zachor: to mark the 6th anniversary of the expulsion of the Jews from Gush Katif and the Northern Shomron; we continue to pray and work for their restoration and for the Ge'ula Shlayma. Thank you."


Like what you read? The articles I write take a lot of time and effort. Please contact me to sponsor an article for $36 in honor of the birthday, wedding anniversary, or yarhtzeit of a loved one, or for a refuah shleimah or the like. Also, see here concerning the tremendous merit of supporting the dissemination of Chassidus, and the blessings that one receives for doing so.
Posted by Yehoishophot Oliver at 9:47 PM