Being a chossid: A lifetime of striving 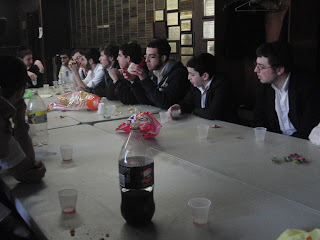 Being a chossid: A lifetime of striving

Chassidus Chabad calls the Jew to engage in lengthy, in-depth, rigorous study of Hashem’s greatness, with the goal of reflecting upon that knowledge and thereby evoking love and fear of Hashem, and true love of one’s fellow Jew.


So what if the chossid feels that this goal is impossibly distant, whether because the chossid believes that he or she lacks the intellectual abilities, patience, or sufficient time to be truly devoted to such in-depth study and prayer?


1. The possibility that one may never actually reach the intellectual and emotional ideal of Chabad Chassidus is not a reason not to strive for it, for, in the words of our Sages, “You do not have to finish the task, but neither are you free to desist from it.”[1]


2. The avodah of Chassidus is not necessarily about reaching a goal. It is about the journey, about the striving and the yearning. As the Alter Rebbe says,[2] an oved, literally, “one who serves Hashem,” is in the middle of the avodah, still struggling and fighting, and may be very far from the desired destination. Yet what matters is that he or she is forging ahead, undaunted by the mammoth task ahead, joyful and confident in his or her service of Hashem despite the long journey ahead.

3. The only ones who ever become millionaires are those who aspire to that goal; those content with a life of simple means will almost certainly never become wealthy. Likewise, the only way to be “in the running” to reach great spiritual heights is by simply setting them as one’s goal.

4. Continuing from the previous analogy, even if the entrepreneur never reaches millionaire status, he at least stands a chance of being much more wealthy than he would have been otherwise. Similarly, if someone is constantly striving to reach a lofty spiritual level, he will at least reach a level far beyond what he could have reached without this aspiration.

5. “[Hashem says:] I only ask of them [the Jewish people] according to their ability.”[3] Hashem only expects us to try as hard as we can. More than that, we are not expected to do.


So even if, due to circumstances beyond the chossid’s control, he or she is unable to devote the amount of time and energy necessary to actually accomplish that goal, the efforts in that direction are not in vain. It is not a matter of all or nothing.


6. Every effort the chossid makes in striving towards this noble goal according to his or her abilities and opportunities will certainly being spiritual and material benefit and endow the person with the strength to overcome the evil inclination as he is now.


And after all, Hashem was the One to put the person in this predicament, so it is surely His will that the person serve Hashem in this way.

And who knows, maybe the chossid will, one day, reach the heights for which he or she yearns.

~Rivka Katz and family, in honor of the graduation of their daughter, Dilkah Beilah bas Rivka Leah. ~Reb Kasriel ben Yehudis and Chana Feige bas Reizl (my parents, tzu langeh, gezunteh, zisseh yoren) in honor of their 36th wedding anniversary.
~Reb Menachem Kovacs, who requested that this message be attached:

Like what you read? The articles I write take a lot of time and effort. Please contact me to sponsor an article for $36 in honor of the birthday, wedding anniversary, or yarhtzeit of a loved one, or for a refuah shleimah or the like. Also, see here concerning the tremendous merit of supporting the dissemination of Chassidus, and the blessings that one receives for doing so.
Posted by Yehoishophot Oliver at 4:37 PM

Email ThisBlogThis!Share to TwitterShare to FacebookShare to Pinterest
labels: effort, what is a chossid, yearning