11 Nissan--The Rebbe's mission: Be in and above the world 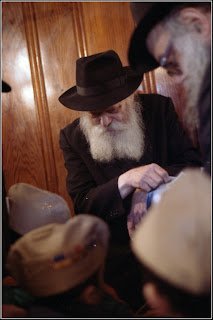 Today is 11 Nissan, so let us take a minute to reflect on the Rebbe’s declared mission.

A Jew should not cut himself off from the world, nor may he become immersed in it and forget about serving Hashem. Rather, he should combine the two; he should be in the world and above it simultaneously.

(The Rebbe was the ultimate example of this, for although he lived a life of intense holiness and purity, he was extremely practical and action-oriented, becoming involved in the nitty-gritty issues of the administration of Chabad and non-Chabad institutions and publications worldwide, and devoting his time to inspire every single Jew. Indeed, perhaps the most oft-quoted saying he qould quote from our sages was “Action is the main thing.”)

Logically, this should not be possible, for the world and G–dliness are contradictory. The world conceals the reality of Hashem, and so, it would seem, the only way to connect to that reality is by severing ties with the world. However, one who does so fails to fulfill the purpose of his life—to reveal G–dliness within the world.

How, indeed, can G–dliness be brought down to a world of concealment of G–dliness, without the world ceasing to exist, or the purity of the divine revelation being compromised?

Since Hashem is omnipotent, He can combine these two opposites. How do we connect to this infinite power, and thereby accomplish this in our own lives? We do so through bittul, nullifying ourselves to Hashem. Through bittul we lessen our sense of self and thereby create room for Hashem’s infinity to shine into our personal lives, enabling us to combine these opposites.

On a more cosmic level, during the age of exile, the upper realms and the lower realms are split apart. From our perspective, G–d’s reality is abstract; we know that He exists, that Torah is true, and that the Jewish people are chosen, but this reality is hidden, and the world around us and the nations within it cry out the opposite.

The Rebbe declared that the purpose of our generation, the seventh generation in which the Rebbe is the leader, is to bring the Shechinah down here, into our lowly world, with the coming of Moshiach. In that era, the physical world will remain as it is, not becoming “a world of souls,” but rather, remaining “a world of souls in bodies.” No longer will G–dliness be abstract, as it was throughout the age of exile, and even during the leadership of the first six Chabad Rebbeim. Rather, the Rebbe will reveal the Shechinah, and reveal it lematoh ba’aretz—down here, in this world.

Our part to prepare for this is to create an “inner redemption.” This means bringing down our abstract knowledge (haskalah) into practical inner change (avodah). It means not only attaining holy intellect and sublime emotions, but bringing them to permeate our thought, speech, and action, and extending it to all those around us. We thereby hasten the coming of the collective redemption with Moshiach now!
Posted by Yehoishophot Oliver at 11:37 PM

Email ThisBlogThis!Share to TwitterShare to FacebookShare to Pinterest
labels: bittul, ratzo and shov, relating to the secular world, the Rebbe's teachings