Yiddishkeit and Chassidus: For our own benefit 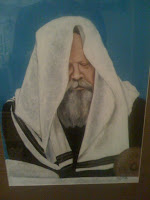 Original painting by Chana Rivka Hawkins
Someone once wrote to the Rebbe asking for permission to be “released” from the Rebbe’s directive to recite the daily Tehillim and study the daily portion of Tanya. The Rebbe responds:

You write in your letter that you are so overloaded with learning commitments that you are only careful to study the daily portion of Chumash with Rashi, but you do not recite the Tehillim as it is split up into the days of the month, or the daily study portion from the Tanya. You ask if you can be released from these two latter requirements.

A not-so-amusing story is told. Once a not-so-bright truck driver came to a bridge that had a sign that said: “Warning! Trucks above eight feet high must not go further!” Knowing that his truck was nine feet high, the truck driver looked to the right and to the left, carefully searching for any observers, or a camera. Once he was sure that no one was looking, he pressed his foot down on the accelerator ...
Some people have a certain attitude (and perhaps we all have it to some extent) that since Torah and Mitzvos are a duty from Hashem (and they are indeed), Hashem is asking us to do them for Him, and not really for ourselves. The consequence of this is that when we feel up to doing things for Hashem, we are careful to keep the Mitzvos, but when we are not in the mood, our observance is lacking.
When we dig deeper, this attitude to observance holds a shocking implication. It conceives of Hashem as imposing restrictions and obligations on us in order to satisfy some sort of selfish whim of His, without really caring about the burden and difficulty that these strictures create.
However, nothing could be further from the truth. Hashem only gave us the Mitzvos “in order to refine the creations” (Bereishis Rabbah 44:1), to elevate and refine us and bring us to our perfection. Thus, every Mitzvah performed elevates a different limb of the body and the faculty of the soul associated with it; full performance thus elevates the entire body and soul (Tanya ch. 4).
Similarly, some who technically identify with the Chassidic community also subconsciously regard studying Chassidus and observing Chassidic customs as an act of extra piety in which we are essentially doing Hashem a favor, or doing the Rebbeim of Chassidus a favor, and losing out personally.
Again, nothing could be further from the truth. The Rebbeim taught Chassidus and Chassidic customs (e.g., the study of Chitas—Chumash, Tehillim, and Tanya, as mentioned above) because they sought to reveal special, priceless methods (see here) of refining and elevating our souls and bringing them to perfection. Earlier generations were not privy to these methods, and yet we, although we are far less worthy than they, have been showered and spoiled with an endless treasure-trove of these teachings.
Moreover, these teachings contain an elixir of spiritual life (see here) to help us survive and even thrive despite the intense, doubled, and redoubled darkness at the end of the exile (see here). Choosing to abstain from studying Chassidus or following its ways is choosing to deprive one’s Neshamah of the benefits that it could have gained from doing so, and to deprive one’s body of the material blessings that this would have brought in its wake.
Using the analogy of medicine above, Torah and Mitzvos in general and the path of Chassidus in our generation, are the medicine that Hashem prescribed for our souls. Regarding them as a burden to be done in order to do a favor to Hashem or to those who have been sent to teach his word, the Rebbeim, is akin to a patient who refuses to do his doctor a “favor” and swallow the medicine that the doctor prescribed for him.
The childish immaturity of this attitude with respect to physical health is blatant; let us learn this lesson in connection with spiritual health as well.
Posted by Yehoishophot Oliver at 4:42 PM

Email ThisBlogThis!Share to TwitterShare to FacebookShare to Pinterest
labels: benefit from Torah, Chitas, the Rebbe's teachings