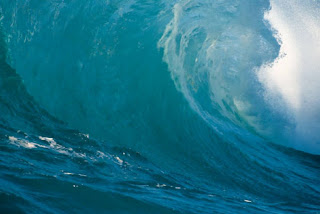 Although the flood was approaching, Noach prayed only for himself and his family, and ignored the entire generation. Only when approached and asked why he was constructing an ark would he tell them that G–d would imminently bring a flood upon the world, and he rebuked them. However, he waited until they approached him, and didn’t approach them, and of this the Zohar says harsh words. [Zohar 1:106a states that the flood was attributed to Noach, for had he prayed for the members of his generation, the flood could have been averted—see here. Cf. Likutei Sichos, Vol. 2, pp. 452-453.] ...

Abraham, in contrast, did not wait until he was approached. Rather, as it is written, “There he [Abraham] proclaimed the Name of G–d, L–rd of the world” [Bereshis 21:33]—for Abraham approached everyone and publicized G–dliness in the world.

One of the chiddushim (novelties) that the Rebbe introduced is the concept of mivtza’im, the Mitzvah campaigns. The core of this idea is that individual Jews, of their own initiative, should approach other Jews and encourage them to observe a Mitzvah.

At first glance, the idea of walking up to a total stranger (on the outside, at least) and after saying a brief hello, suggesting that he do a Mitzvah, violates western social norms. One who does this may even be accused of being disrespectful, rude (G–d forbid), and worst of all, “intolerant.” In contrast, the modern-day secularist society regards the person who is “tolerant” and blissfully ignores the sinful behavior of others despite his ability to influence them as praiseworthy and virtuous.

However, in fact the opposite is often the case. The “live and let die” attitude demonstrates the ultimate contempt and inhumanity. G–d gave this person the privilege to know that He exists, that He commanded us to abide by certain laws, and that this is the only way to fulfill the purpose of one’s creation, and thereby find true happiness and fulfillment in life (see here). This creates a moral obligation for him to share this knowledge with those less fortunate than he whom he has the opportunity to influence. Obviously, one should exert influence appropriately, in a way that will most likely be effective, through gentle persuasion, and so on. But one may not sit idly by when he is in a position to save others from spiritual death.

Because if you wait until they come to you, in the meantime they may well drown.
Posted by Yehoishophot Oliver at 12:37 PM

Email ThisBlogThis!Share to TwitterShare to FacebookShare to Pinterest
labels: love for a fellow Jew, Parshas Noach, rebuke, the Rebbe's teachings