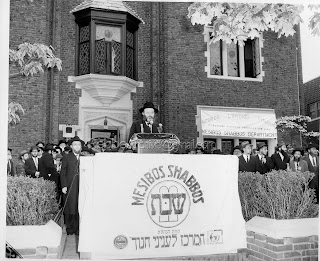 Nowadays the way to garner the respect of non-Jews is through public, unabashed demonstrations of Jewish observance:

The honor of the Jewish people should be revealed by performing activities of goodness and holiness in a way that is apparent to all, including the gentile nations. This is along the lines of the verse: “And all the nations of the earth will see that the Name of G–d is called upon you [and they will fear you]” (Devarim 28:10). The Talmud interprets: “This refers to Tefillin on the head” (Berachos 6a). A similar principle applies to all areas of Torah and Mitzvos, for “The entire Torah is compared to Tefillin” (Kiddushin 35a).
Hisva’aduyos 5749, Vol. 4, p. 111.

In past generations, Jews would generally keep to themselves, and for good reason. It was felt that public displays of Jewish identity would likely provoke unhealthy attention from our non-Jewish neighbors. It might be interpreted as an attempt to proselytize them, and arouse their animosity, which could lead to them harming us, G–d forbid.
However, nowadays, thank G–d, we live in a different time, in which the opposite is the case. When we serve Hashem proudly and fearlessly, this evokes the respect and awe of the non-Jews around us.
Posted by Yehoishophot Oliver at 9:22 PM