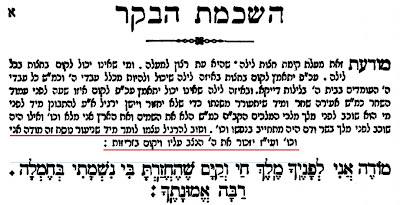 The very first thing that a Jew does in the day is to recite Modeh ani: “I gratefully thank You, living and eternal King, for You have returned my soul within me with compassion—abundant is Your faithfulness!”

Although the word modeh can mean to thank, it can also mean to acknowledge. When a Jew declares Modeh ani, he says: “Hashem, I acknowledge You!”

At first glance, this acknowledgment lacks any depth. After all, the Jew has only just woken up; he’s still shaking the sleep out of his eyes and coming to his wits; he has not yet had the chance to reflect, understand, feel, and internalize anything at all. When a Jew recites Modeh ani, his lack of development and comprehension is akin to that of a newborn child.

This begs the question: Of what value is an acknowledgment when submitted in such a lowly state?

However, Chassidus explains that the opposite is the case: Because it does not involve intellectual comprehension, in a sense, Modeh ani is the highest prayer of all.

There is a principle in Chassidus that “the manifestations hide the essence.” When you see the superficial aspect of a thing, you lose sight of its very core. For example, when reading words on a page—the “manifestations”—one can come to forget that one is actually staring at ink—the “essence.”

Likewise, as soon as the Jew has reached a certain level of understanding, he can no longer submit to Hashem (at least, not on a conscious level) from the very essence of his soul; his submission must stem from his understanding. He does not submit naturally, because of the essential bond between a Jew and Hashem’s very Essence. Rather, he submits because he understands that he should. He understands Hashem to a certain degree, and yet he also understands that certain things are beyond his comprehension, and so he acknowledges them.

This is the difference between the acknowledgement of Modeh ani and of Hodu laHavayeh, which is the start of Shacharis, the morning prayer.

In contrast, at the beginning of Shacharis, we recite, “Acknowledge Havayeh, and call out in His name.” “His name” refers to the level of G–dliness that enters nature (which stems from the divine names of Ad-nai and Elokim). So we need to “call,” i.e. summon down into our world this level of G–dliness, so that it can constantly create the world. In contrast, with respect to Havayeh, a level that transcends time and space and is therefore completely beyond us, we must simply acknowledge and accept without understanding.

Yet although one acknowledges, since his acknowledgement actually stems from his understanding—his understanding of the limits of his intellect—it does not permeate his entire being, and thus it only connects him with levels that transcend intellect, but not with Hashem’s very Essence, as when one recites Modeh ani.

This post was dedicated by Reb Yisroel Meir Rafael and family.


~~~~~~~~~~~~~~~
Like what you read? The articles I write take a lot of time and effort. Please contact me to sponsor an article for $36 in honor of the birthday, wedding anniversary, or yarhtzeit of a loved one, or for a refuah shleimah or the like. Also, see here concerning the tremendous merit of supporting the dissemination of Chassidus, and the blessings that one receives for doing so.
Posted by Yehoishophot Oliver at 12:53 AM