Counteracting the fallout from outreach for the Chabad community 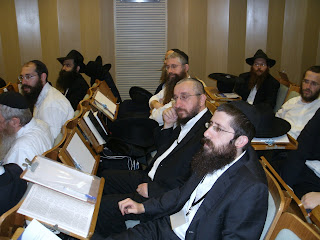 The Rebbe has charged chassidim with a clear mission: Spread Torah in general and Chassidus in particular to every Jew. This is the task of our generation, the Rebbe declared.

Yet in the process, complications and dilemmas arise. To explain, for the purpose of this discussion, let us break the Jewish people down into three general groups: non-frum Jews, frum Jews who are not chassidei Chabad, and chassidei Chabad.

Reaching every Jew means reaching each of these groups and teaching them Torah in general, and Chassidus in particular.

However, it is clear that the approach that will work for one group will not work for the other. Indeed, it is obvious to most that “hardcore” material geared to committed chassidim will most likely be looked at askance by others. Likewise, no elaboration is needed on the theme that material written for a frum crowd will usually not be effective for as-yet assimilated Jews.

(This is not to say that literature prepared for one audience can never, ever be beneficial in any way for another that is more advanced, for the experience of some shows that this is also sometimes the case; however, it is a fair generalization to say that it is unlikely, and that more often than not the loss incurred outweighs the benefits, if any.)

I wrote an article (see here) focusing on the way this problem has manifested itself in terms of literature. But of course, this phenomenon is not limited to literature. In fact, this fuzziness has infiltrated its way into almost every aspect of modern Lubavitch culture. I will focus here on schools and shuls:

Schools: In many communities, Lubavitcher run schools whose students come from all the three above demographic groups together—children from non-frum, frum, and Lubavitcher homes. This setup is a recipe for constant conflict and dissatisfaction.

And of course, sometimes the complaints are leveled the other way around as well—that these schools are too religious or too, um, “chassidish” for the other kids, or at least the other parents, to handle. In many cases, the cacophony of complaints can be heard from all the parents simultaneously, making the job of administrating these schools most unenviable.

For example, some parents want no secular studies, others less, others more. Some parents want only Yiddish spoken in the school, some want a bit but not a lot, still others want none. And so on.

Shuls: Some communities that aim to cater to the non-frum or recent Ba’al Teshuva segment of the population relax standards in various ways, such as by allowing various public events such as fundraising dinners to be mixed, or have separate seating but without a mechitza, and so on.

Now, it appears that if the number of congregants identifying themselves as chassidei Chabad are a small minority, it is reasonable enough to suggest that they move elsewhere or defer to the lower standards of the majority. However, if they are a large minority, never mind the majority, I believe that this approach is not so reasonable. Those who have reached a more advanced point in their avodas Hashem are no less Jews than those who have not. Their spiritual needs are no less valid than those of others, and they should not have to lower their standards, for “maalin bakodesh, velo moridin”—“one should rise in holiness, and not descend” (Shabbos 21b). On the contrary, they deserve to be commended for their accomplishments, and certainly not punished, rachmana litzlan.

In many cases, this kind of compromise has had unfortunate, perhaps even tragic, consequences, especially for the younger generation.

One such consequence appears to be the degradation and erosion of the pristine values and high standards that should theoretically permeate the Lubavitch community, but undeniably don’t. Another is a lack of expectation for high performance, which in turn leads to a debilitating sense of complacency and an insidious corrosion of idealism. This is all the more absurd, considering that traditionally the derech of Chassidus Chabad demands rigorous personal change more intensely than other Chassidic groups.

To be sure, in many cases the schools and shuls with the lower standards described above were established with the Rebbe’s approval. However, this does not prove that this must remain forever the status quo, for it is evident that the desperate circumstances of those times necessitated such an approach. But times have changed in countless ways. The return to Yiddishkeit has increased dramatically over the post-war decades, the frum community is burgeoning, there is a plethora of schools and shuls, and Chabad communities and institutions are growing and developing worldwide. In many places the reality has changed such that separate institutions that follow higher standards are now feasible, and have been for a while.
On the practical level, the short-term solution to such natural conflicts is to come to a working compromise. In the long term, however, such a situation should not and cannot continue indefinitely. One cannot satisfy everyone, nor is it fair to drag people down to lower standards than those appropriate for them (or, conversely, to require them to adopt standards for which they are not yet ready). This problem can only be resolved by creating multiple institutions and infrastructures, each catering to the needs of a specific group.

Let us promote recognition of this problem, and do our utmost to rectify it as appropriate wherever it is found. May Hashem help us.
Posted by Yehoishophot Oliver at 3:19 AM