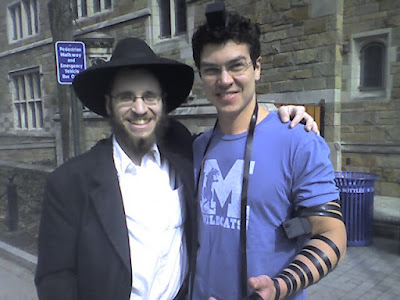 How does one go about teaching Jews coming from an assimilated background how to adopt Torah observance? It involves understanding where they are coming from.

For them (especially if they are older), even a small change from their regular schedule of observance usually requires a tremendous internal effort. Thus, demanding that they take on everything at once, or even many things at once, or even several things at once, may be so overwhelming that they will end up doing nothing, as the Gemara states, “One who grabs too much ends up with nothing”.[1] This could mean that they will not listen in the first place, or it could mean that they will listen and do as expected, but will over time come to feel resentful, and that the change in their lifestyle was forced.

Thus, those who are in the position of teaching beginners to Torah observance should guide their students slowly, step by step, instructing the student to focus on bolstering their observance of the specific Mitzvah in which he or she has chosen to grow, and not to jump ahead.

On the other hand, the teacher must avoid any words or actions that could be construed as endorsement of non-observance.  Instead, the teacher must make it clear that the changes that the newcomer has adopted are not the end of the journey, but only the beginning.
This is comparable to teaching a child Alef beis. First one teaches an alef, then a beis, and so on. During this process one does not tell the child that an alef is the only letter there is to know, or the only one worth knowing. Rather, one tells him that today an alef will suffice as a beginning, since one can’t learn everything at once; however, with time he will learn more and more letters, until he will master them all. Then, he will learn to combine different letters into words, and he will learn different words, and ideas in Torah, until he will become, with the help of Hashem, an accomplished great Torah scholar.

When one starts with teaching a child an alef, in no way does this constitute compromise. On the contrary, this is the proper way to learn—to start from the beginning, and advance from step to step.

The same principle holds when teaching the Alef beis of Yiddishkeit. One should encourage the beginner to take upon himself one Mitzvah and continue observing it until he feels comfortable with it. Only then should he take upon himself another, additional Mitzvah, until he feels comfortable with that Mitzvah, and so on. Since “One Mitzvah brings another in its wake,”[2] he will ultimately come to full observance, with the help of Hashem and the support of his teacher and, when possible, of his family and community.

Although this approach seems logical and should be altogether simple and straightforward, it is not intuitively clear for someone who has been raised frum, for he has been trained from early childhood to fulfill all the Mitzvos without compromise.

Certainly once he has reached Bar or Bas Mitzvah, he is told to keep the entire Shulchan Aruch, whether he feels comfortable doing so or not. The idea of consciously choosing to keep one Mitzvah and not others, even temporarily, runs against his grain (and this is the way he should feel). Thus, when teaching the beginner, the teacher raised frum must make a conscious effort to adjust to the vastly different circumstances of his pupil.