The Rebbe's public will 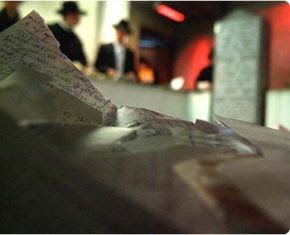 The Rebbe’s Public Will


On Motza’ei Shabbos Terumah 5748 (20 February 1988), ten days after the passing of the Rebbetzin Chaya Mushka, of blessed memory, the Rebbe shocked the chassidim by delivering a sicha that clearly referred to his passing as a possible scenario, and that prescribed clear instructions concerning how to act in that event. Thus, the Rebbe in effect delivered a public will. The full version of this sicha was printed in vol. 624 of the Kfar Chabad magazine several weeks after Gimmel Tammuz. The Hebrew transcript (adapted for publication) can be found in Hisvaaduyos 5748, Vol. 4, pp. 401,2,3,4 (see pages before and after for the full context).

Thesicha refers to the expression, “Come, let us consider an accounting of the world,” which is taken from Bava Basra 78b. The Gemara explains this to mean that one should consider “a Mitzvah’s loss against its gain, and a sin’s gain against its loss ... and if you do so, you will be built up in this world and established in the World to Come.” This is a reminder of the importance of calculating one’s actions carefully in anticipation of their consequences after one passes away. Thus, the expression “Come, let us consider an accounting of the world” indicates considering the scenario of departure from this world to the World to Come. The Rebbe related a story of the Tzemach Tzedek that borrows this expression to refer euphemistically but unambiguously to a calculation of what to do in preparation for the Histalkus of a Rebbe.

This story had never before been printed, and this was the first time that the Rebbe told it in public. The story was not told in full in thesicha, but the author of Cheshbono Shel Olam relates that in an unpublished manuscript it is written as follows:

The Rebbe commented on this story, saying that the fact that it reached him indicates that there must be a lesson to be derived:

On that occasion I was surprised. Why was this told to me? Especially since this involved a lack of honor toward the one who said this before the Tzemach Tzedek. However, this implies that this too is related to the concept of “the living shall take to heart.”[2]

To preface, after the Tzemach Tzedek discussed “come, let us consider ... ” he lived for many good years, in which his role as leader was widely spread, as were the wellsprings [of Chassidic philosophy], along with all the famous areas of his holy work, to the point that it reached non-Jews. ... Likewise, we saw that other Rebbeim of Chabad also followed the practice of “Come, let us consider an accounting of the world,” and this brought them a long, good life in the literal sense.

So, too, in our case. Since this story was told to us, this demonstrates that “the living shall take to heart” in this area as well. ...

On account of the length [of the amount spoken] the listeners may miss the main point. Thus, I repeat it: There exists the concept of “Come, let us consider an accounting of the world,” the reckoning of a person. [This means calculating] whether it [the position of leadership] needs to be transferred, or when it needs to be transferred, or it may remain in both ways, along the lines of what we find concerning Moshe Rabeinu, that while he was still alive, even before the Torah was given, when “Moshe received the Torah from Sinai, he charged his student Yehoshua bin Nun: “Go out, and fight against Amalek.”[3]

... The answer is thus clear: [When questions arise] one should consult with three chassidishe rabbonim [i.e., Chabad rabbis who are trained halachic authorities], whether through one of them [who will then discuss it with another two], or with all three at the same time, and the greatest of them, or all three together, will deliver the verdict.

In other words, in addition to that which has been discussed recently concerning the imperative to fulfill the instruction of the Mishnah, “Make for yourself a teacher,”[4] and in matters related to healing, to consult with doctors, according to the statement of our sages on the verse, “And he will surely heal”[5] [“From here we see that a healer is given permission to heal”[6]]. These directives are not related to “Come, let us consider an accounting of the world.” Still, this applies in a similar manner, and with even greater intensity, concerning “Come, let us consider an accounting of the world”: the answer is clear, in a way that leaves no room for doubt, that this is the province of three chassidishe rabbonim.

This applies to several villages and cities, and in every single place there is a committee of the chassidishe rabbonim of that place—whether for that city, for that neighborhood, or for the entire country—which are all legitimate practices.[7] Wherever there are three chassidishe rabbonim, they are themselves the Beis Din. In a location that has less than three, they can combine rabbis from elsewhere, similar to what is written even concerning the Great Sanhedrin. This task is being assigned to the minds of these people, and they accept the task, the mission, and the strength that is granted them, to deliver the above ruling in their respective locations, and with joy and gladness of heart. ...

As mentioned, this is being said in a clear manner, one that leaves no room for any doubt, even a doubt of holiness. There is not even room to ask about this matter again. This has already been transferred, and it is as if the decision in this matter has already been made. Let this be a clear demonstration of how one should behave for a long, good life, and there will be no room for any confusion. If anyone has further questions on the matter, whatever they may be, in these matters, the answer is already prepared by the chassidishe rabbonim, in the role of a Beis Din.

Summary: In the event of the Rebbe’s Histalkus, the Rebbe made clear in advance that when important questions arise about which people would have consulted with the Rebbe, they should consult with three local chassidishe rabbonim.

Explanation: Here it seems to be referring to issues of a more large-scale, communal nature, because the Rebbe specifically says that this directive comes in addition to the existing instructions to “Make for yourself a teacher,” and in matters of health to consult with doctors who are friends, and so on, which are means of resolving questions of an individual.

Comment: In my experience, this sicha is widely unknown even among Chabad chassidim. I have almost never heard anyone speak about it, in private or in public, and those whom I told about it expressed amazement. In my humble opinion this is the most significant sicha for chassidim in our current situation, for it shows how the Rebbe clearly foresaw our situation, and prepared us for it. This makes it of the utmost practical importance to the Chabad community, and it should therefore be widely publicized.

(The article above is based on Binyamin Lipkin’s Cheshbono Shel Olam, Machon HaSefer, 5760, pp. 45-48. See the continuation to this post here, and the related post here.)

Like what you read? The articles I write take a lot of time and effort. Please contact me to sponsor an article for (at least) $36 in honor of the birthday, wedding anniversary, or yarhtzeit of a loved one, or for a refuah shleimah or the like. Also, see here concerning the tremendous merit of supporting the dissemination of Chassidus, and the blessings that one receives for doing so.
Posted by Yehoishophot Oliver at 9:28 PM